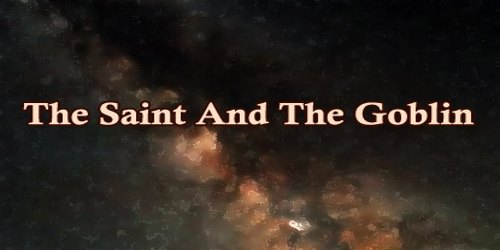 The Saint And The Goblin

The little stone Saint occupied a retired niche in a side aisle of the old cathedral. No one quite remembered who he had been, but that in a way was a guarantee of respectability.

At least so the Goblin said. The Goblin was a very fine specimen of quaint stone carving and lived up in the corbel on the wall opposite the niche of the little Saint. He was connected with some of the best cathedral folk, such as the queer carvings in the choir stalls and chancel screen, and even the gargoyles high up on the roof.

All the fantastic beasts and manikins that sprawled and twisted in wood or stone or lead overhead in the arches or away down in the crypt were in some way akin to him; consequently, he was a person of recognized importance in the cathedral world.

The little stone Saint and the Goblin got on very well together, though they looked at most things from different points of view. The Saint was a philanthropist in an old fashioned way; he thought the world, as he saw it, was good, but might be improved. In particular, he pitied the church mice, who were miserably poor. The Goblin, on the other hand, was of opinion that the world, as he knew it, was bad, but had better be let alone. It was the function of the church mice to be poor.

“All the same,” said the Saint, “I feel very sorry for them.”

“Of course you do,” said the Goblin; “it’s your function to feel sorry for them. If they were to leave off being poor you couldn’t fulfill your functions. You’d be a sinecure.”

He rather hoped that the Saint would ask him what a sinecure meant, but the latter took refuge in stony silence. The Goblin might be right, but still, he thought, he would like to do something for the church mice before winter came on; they were so very poor.

Whilst he was thinking the matter over he was startled by something falling between his feet with a hard metallic clatter. It was a bright new thaler; one of the cathedral jackdaws, who collected such things, had flown in with it to a stone cornice just above his niche, and the banging of the sacristy door had startled him into dropping it. Since the invention of gunpowder, the family nerves were not what they had been.

“What have you got there?” asked the Goblin.

“A silver thaler,” said the Saint. “Really,” he continued, “it is most fortunate; now I can do something for the church mice.”

“How will you manage it?” asked the Goblin.

“I will appear in a vision to the vergeress who sweeps the floors. I will tell her that she will find a silver thaler between my feet and that she must take it and buy a measure of corn and put it on my shrine. When she finds the money she will know that it was a true dream, and she will take care to follow my directions. Then the mice will have food all winter.”

“Of course you can do that,” observed the Goblin. “Now, I can only appear to people after they have had a heavy supper of indigestible things. My opportunities with the vergeress would be limited. There is some advantage in being a saint after all.”

All this while the coin was lying at the Saint’s feet. It was clean and glittering and had the Elector’s arms beautifully stamped upon it. The Saint began to reflect that such an opportunity was too rare to be hastily disposed of. Perhaps indiscriminate charity might be harmful to the church mice. After all, it was their function to be poor; the Goblin had said so, and the Goblin was generally right.

“I’ve been thinking,” he said to that personage, “that perhaps it would be really better if I ordered a thaler’s worth of candles to be placed on my shrine instead of the corn.”

He often wished, for the look of the thing, that people would sometimes burn candles at his shrine; but as they had forgotten who he was it was not considered profitable speculation to pay him that attention.

“Candles would be more orthodox,” said the Goblin.

“More orthodox, certainly,” agreed the Saint, “and the mice could have the ends to eat; candle-ends are most fattening.”

The Goblin was too well-bred to wink; besides, being a stone goblin, it was out of the question.

“Well, if it ain’t there, sure enough!” said the vergeress next morning. She took the shining coin down from the dusty niche and turned it over and over in her grimy hands. Then she put it to her mouth and bit it.

“She can’t be going to eat it,” thought the Saint, and fixed her with his stoniest stare.

“Well,” said the woman, in a somewhat shriller key, “who’d have thought it! A saint, too!”

Then she did an unaccountable thing. She hunted an old piece of tape out of her pocket, and tied to crosswise, with a big loop, round the thaler, and hung it round the neck of the little Saint.

Then she went away.

“The only possible explanation,” said the Goblin, “is that it’s a bad one.”

“What is that decoration your neighbor is wearing?” asked a wyvern that was wrought into the capital of an adjacent pillar.

The Saint was ready to cry with mortification, only, being of stone, he couldn’t.

And the news went round the Cathedral that the shrine of the little stone Saint had been enriched by a priceless offering.

“After all, it’s something to have the conscience of a goblin,” said the Saint to himself.

The church mice were as poor as ever. But that was their function.