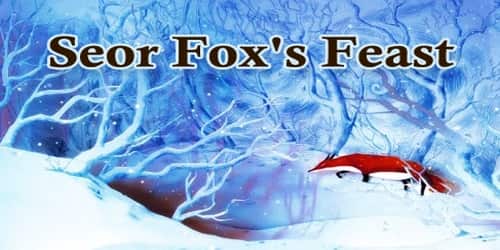 In the days when the world was new, there was little food to be found, and the animals were often hungry. The birds were luckier. They could fly into the sky, and there, they said, food was in abundance. The birds often chattered about their wondrous feasts up in the clouds.

Many of the animals envied the birds, but most envious of all was Seor Fox. He was a greedy, hungry character who often made fun of the birds, and was determined to find some way to share the birds’ feast.

One day as he trotted through the woods, he came upon Mallcu or Condor. Seor Fox bowed low and said, “Oh, great and glorious lord of the heavens, I beg you, sir. Won’t you help a poor lowly creature? I’m forever searching for food, and just once I wish I could travel into the sky and attend the birds’ feasts. If only you would take me with you!”

Mallcu raised his proud head and said, “Only on one condition, Seor Fox, will I take you with me.”

“You’ll have to behave well and eat properly. You may not gnaw at bones or steal food from others. You must not toss your bones or apple cores. And you must not eat too much.”

“I promise!” Seor Fox said passionately. And so Condor picked up Seor Fox in his claws and they flew high up into the sky. Higher and higher they flew until they reached a huge white cloud. There Mallcu set Seor Fox down. “You are here,” Mallcu said. “I shall return later to take you back home.”

Seor Fox could not speak, for he was stunned at the sight before him. A huge table stood on the cloud, and on this table lay platters and bowls and plates brimming with every food imaginable.

A moment later the birds appeared, flying in from everywhere, and everyone prepared to eat. Seor Fox politely began to eat after the others had begun. And, oh, did they eat! They ate bananas and rice, apricots and corn, coconut and cocoa, quince and quinoa. On they ate until everyone was satisfied. When they were through, the birds carefully plucked crumbs from their feathers. They bowed to Seor Fox. “Good day,” they said, and off they flew to the places from which they had come.

Now Seor Fox had eaten a great deal, but the table was still full, and he could not stop himself from eating more. When he saw that he was all alone, he began to munch and crunch, and soon he forgot his promise to Mallcu. He tore into the food, tossing husks and kernels and cores and bones behind him as he ate. He ate and ate and ate. It seemed he would never stop.

When Mallcu returned, he saw a terrible sight. Seor Fox was eating greedily, making a mess of the cloud, the table, and even his bib.

“You’ve broken your promise,” Mallcu cried. “You can stay here now. I won’t take you back home. You’ll be stuck up here forever and you’ll never have another bite of food.” Then away he flew.

Seor Fox began to tremble with worry. He waddled to the edge of the cloud and looked down, and he saw that Earth was far away. He began to grow dizzy at the sight. Soon he sat down on the cloud and began to howl in misery.

Just then some tiny birds flew past, and when they saw the poor fox weeping, they felt sorry for him. “We’ll help you get home,” they said, and from the straw, in their nests, they made a long, sturdy rope. They tied one end to the cloud and tossed the other end toward the Earth.

“Slide down this rope,” the little birds said.

Seor Fox grabbed hold of the rope and began to slide down. Now, this was a difficult task, for he had grown terribly heavy, and as he slid, his paws grew red and raw.

Just then a flock of parrots flew past, and when Seor Fox saw them, he laughed out loud. “Look at you!” he cried. “You’re screeching sillies, that’s what you are.”

This infuriated the parrots, and they began to screech and howl at him. “We’ll teach you a lesson,” they cried.

“I’m joking!” Seor Fox said. “Really. Please forgive me,” for he could see the parrots might cause him some harm.

“All right,” said the parrots, and they wheeled to fly away, but Seor Fox could not control himself.

“Feathered friends! Chattering beak birds!” he called after them, and when the parrots heard his taunts, they turned and tore into the rope with their sharp beaks.

“I’m joking! I’m joking!” Seor Fox cried, but he was too late. The parrots tore right through that rope, and Seor Fox began to fall.

“Help!” he cried to the birds that flew past, but no one would help him now. They knew he was a greedy creature, and besides, he teased birds. So he fell down and down and down, howling all the way. When he landed on the ground, he hit his stomach so hard that all the kernels and seeds and husks and grains he had eaten scattered all over the land.

And so it was that these things began to grow on Earth. Although the people and the animals know Seor Fox was greedy, they give thanks to him for bringing home these gifts from heaven.