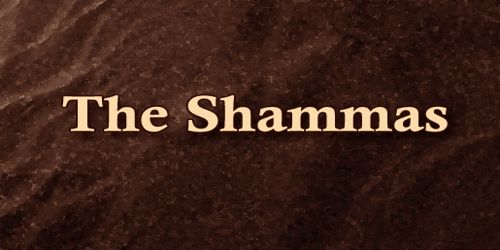 In another millennium, in a synagogue in Jerusalem, there lived a simple man, a shammas by trade. The shammas was the person responsible for cleaning and tidying the synagogue, for emptying the bins and sweeping the floors, for dusting cobwebs from corners and making sure candles were fresh, for keeping windows clean and silver polished. He did a good job, for he was careful and attentive to details. He earned only a little money, but this was enough for his tastes. And so he was satisfied with his life.

But one day, as the New Year turned, a new rabbi came to the synagogue. The new rabbi was a very learned man. He admired learning above all else. He believed that this synagogue could serve its congregants well only if everyone who lived and worked and prayed within its walls was learned enough to read and write. And so he questioned all who lived and worked there.

When he spoke to the shammas, he said, “Please write your name on this paper for me.”

The shammas smiled. He signed an “X” on the line to which the rabbi pointed.

“That is how you write your name?” the rabbi asked.

“Yes,” answered the shammas. “I never learned to read and write, but as you know, I do my job well, and I would be pleased to continue to do this.”

The rabbi frowned. “I’m sorry, but I will have to ask you to leave. I believe it is important for everyone in this place to be learned. Go learn to read and write, and then return.”

The shammas was heartbroken. For many days he worried about what to do. He did not have the money to pay for lessons, and he wanted only to earn a living. Still, he was a practical man and knew he must go on. And so he thought and thought.

Soon he realized that he was very good at one thing. He must do what he loved, which was to clean, and so he decided he would open a shop where he would sell cleaning supplies and would teach his customers all he knew about his trade. And he would learn, too, from his customers.

The shammas gathered his meager earnings, and with these he opened a tiny shop, only a hole in the wall, for he had little with which to begin. Business began slowly, but before long people began to speak admiringly of the shammas and his shop.

“He knows more than any man or woman how to clean a lamp,” the women agreed among themselves. “He is an expert window washer,” others said. “His floors sparkle,” still others said. Before long everyone in the village who wanted to clean a ceiling or a floor, a desk or a tabletop, a shoe or a ship, a bed or baking pan, was visiting the shammas’s shop.

Soon the shop was so busy; the shammas could afford to expand. Within a year his shop was twice the size it had been.

When people of other villages and towns heard about the shammas and his skills, they came to him and urged him to open still more shops.

“To do this,” said the former shammas, “I would need a banker’s loan.”

The bankers, also his customers, were happy to oblige, for they knew that any shop this man opened would soon prosper. And so they prepared the papers, and invited the former shammas to come to the bank, where their desks and floors sparkled.

“Here,” they said, showing the shammas the papers. “We have prepared a bank loan. If you’ll just sign your name here, on this line …” And they pointed to the spot.

The shammas took the pen they offered, and once again he signed his large “X.”

“An ‘X’?” the bankers said. They were astonished at this. “Do you not know how to write your name, sir?”

“I’m afraid not,” said the shammas. His face flushed red as he remembered the rabbi. He waited for the men to tell him that he would not receive his loan.

Instead, they smiled. “Ah then,” they said, “never mind. An X will do. But just imagine, sir. You are so successful and popular and have done so well. Imagine what you would be if you could read and write.”

“Ah,” said the shammas, “if I could read and write, I would be the shammas in the synagogue.”

He understood that misfortune had led him to fortune, for he had been wise enough to work at what he loved.

Adapted from a tale by Shalom Aleichem.