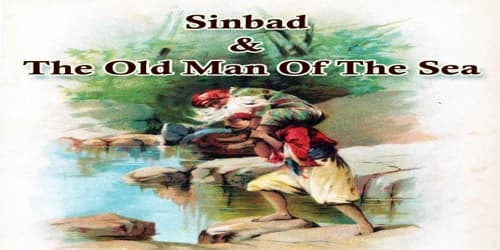 Sinbad And The Old Man Of The Sea

Long ago in Baghdad, there lived the most famous sailor of the age, whose name was Sinbad. He had many adventures at sea, each one a story he loved to tell. After a time, though, he grew weary from his many journeys and tried to settle down, to live in comfort on the land, but the soft and easy life soon bored him, and he decided he must return to the sea. “Ah, we’ll have to see what Fate has in store for me this time,” he thought, and though he knew he might face death or worse, the sea was in his blood. And so he set sail again.

Alas, this time Sinbad’s crew and ship were destroyed in a violent shipwreck. Only Sinbad survived, and as he clung for his life to timber from the ship and floated in the salty sea, he cursed the Fates that had sent him to sea once again. Grieving for all the men he’d lost and for his sad fortunes, he floated on the sea until sore and exhausted, he was swept by the tide onto an island’s shore.

When he had rested from his ordeal, he began to explore the island, and he soon realized that the Fates were not entirely cruel. He had landed in the Garden of Paradise. Huge fruit of every kind and hue hung from the branches, and beautiful birds with wings like rainbows sang in the trees. The sky was blue; the earth soft and warm, and freshwater streams flowed everywhere. Sinbad could not believe his great fortune, and he begged the Fates to forgive him. “I’ll never curse you again,” he said.

As he walked around the island, delighting in all that surrounded him, he wondered what he was meant to do on this island. What did the Fates have in store for him?

He did not wonder long, for when he happened upon a grove of willows, he saw an old man sitting peacefully in a hammock of willow fronds. Sinbad wondered if his eyes were playing tricks, for the man wore an outfit that seemed to be made of leaves, and his skin was the color of the wood. “This must be a mirage,” he said, and he walked closer. “Hello,” he called. “Are you a man?”

In answer, the man raised his arm and beckoned to Sinbad. “Aha, so it is true, you are a shipwrecked sailor too!” Sinbad exclaimed when he was near. But the man did not answer. Instead, he nodded, and then he licked his lips and stared into the distance.

“Is there something you see?” Sinbad asked, and the man shook his head. “What do you look at?” he asked, but still the man did not utter a word. “Are you hurt?” Sinbad asked him. “Can I help you somehow?” After a while, by gesturing and nodding, but using no words, the man showed Sinbad that he wanted to be carried across the island to the other side, to eat the fruit there.

“Poor fellow must have lost the use of his voice and legs,” Sinbad said sadly, and he knelt down. At once the man leaped upon Sinbad’s back, and Sinbad began walking across the island.

When they reached the far fruit trees, Sinbad stopped and knelt again, but the man did not climb off his back and instead gripped him more tightly. “Go easy there,” Sinbad said, and he waited for the man to climb down. It was no use. The man only gripped him more tightly still. Sinbad looked closely at the man’s feet, and he saw that the man’s toenails were like claws. He looked at the man’s legs and noticed they were muscular and hard, more like hide than skin. Now he began to worry.

“Please climb down now,” Sinbad begged, but each time he spoke, the man’s grip grew tighter until poor Sinbad could barely breathe, such was the grip upon his neck.

“Where do you wish to go?” Sinbad asked, and again the man pointed, and again Sinbad walked, though by now the weight of the man was making him wearier than he’d ever been. Still, the man would not let go. He would reach up and snatch a piece of fruit from a tree, spit the seeds down Sinbad’s back, then kick him as if Sinbad were a mule. This went on and on, and nothing Sinbad did could shake the man from his back.

“I shall die this way,” Sinbad thought. “The Fates have played another cruel trick upon me.” Things went on this way for days and nights, for the dreadful old man never slept. He clawed and kicked, and Sinbad could do nothing at all. He knew he could never survive this fate.

And then one day as Sinbad was carrying the man, he spotted a big yellow gourd lying upon the ground. This gave him an idea. With the old man on his back, he went to a tree where red grapes grew in huge clusters, and these he gathered. Returning to the gourd, he took his knife and slit a lid from the top of the gourds. He crushed the grapes inside the gourd and placed the lid back upon it, and this he put in the bright sun to ferment.

After a few days, he returned to the gourd. He lifted the lid and took a long drink. “Ahh, delicious wine,” he said, and felt the old man’s grip grow tight again. “I think I’ll drink it all,” Sinbad said, but the man suddenly grabbed the gourd out of his hands and began to drink heartily. By the time the old man had finished the contents, Sinbad could feel his grip loosening. He heard him mumble, and after a time the man fell fast asleep and let go altogether. He fell from Sinbad’s shoulders.

Sinbad ran to the shore and dived into the sea. He began to swim as hard as he could, all the while hoping the Fates would send someone to his rescue.

Before long, to Sinbad’s immense relief, a ship passed by, and the sailors pulled him on board. When he began to tell his tale, they cried: “That was the Old Man of the Sea. You’re the only man ever to survive an encounter with him.” And so it was that once again Sinbad returned to Baghdad with another extraordinary tale to tell.