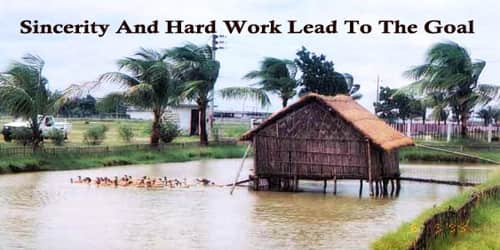 Sincerity And Hard Work Lead To The Goal

Afzal is an educated young man. After completing his MBA, he went to Dhaka in search of a Job. He applied for various posts but he did not get any. Being frustrated, he returned to his native village. He is a highly qualified man. He thinks why he should depend on other’s help. He must stand on his own feet. Thinking so, he went to the Islami Bank local branch and met the Manager. He expressed a desire to be self-reliant. The Manager became sympathetic to him and granted him a loan for 50,000/- taka.

With the money, Afzal started a poultry farm and fisheries. He began to earn more and more and soon became solvent. Now he is one of the richest men of the locality. Thus, he becomes an example of those highly qualified men who are not yet able to manage a job.