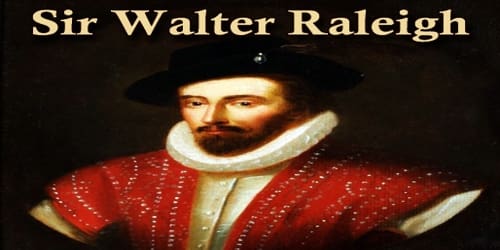 I will tell you about it.

When Raleigh was a young man, he was one day walking along a street in London. At that time the streets were not paved, and there were no sidewalks. Raleigh was dressed in very fine style, and he wore a beautiful scarlet cloak thrown over his shoulders.

As he passed along, he found it hard work to keep from stepping in the mud and soiling his hand-some new shoes. Soon he came to a puddle of muddy water which reached from one side of the street to the other. He could not step across. Perhaps he could jump over it.

As he was thinking about what he should do, he happened to look up. Who was it coming down the street, on the other side of the puddle?

It was Elizabeth, the Queen of England, with her train of gentlewomen and waiting maids. She saw the dirty puddle in the street. She saw the handsome young man with the scarlet cloak, standing by the side of it. How was she to get across?

Young Raleigh, when he saw who was coming, forgot about himself. He thought only of helping the queen. There was only one thing that he could do, and no other man would have thought of that.

He took off his scarlet cloak and spread it across the puddle. The queen could step on it now, as on a beautiful carpet.

She walked across. She was safely over the ugly puddle, and her feet had not touched the mud. She paused a moment and thanked the young man.

As she walked onward with her train, she asked one of the gentlewomen, “Who is that brave gentleman who helped us so handsomely?”

“His name is Walter Raleigh,” said the gentle-woman.

“He shall have his reward,” said the queen.

Not long after that, she sent for Raleigh to come to her pal-ace.

The young man went, but he had no scarlet cloak to wear. Then, while all the great men and fine ladies of England stood around, the queen made him a knight. And from that time he was known as Sir Walter Raleigh, the queen’s favorite.

Sir Walter Raleigh and Sir Humphrey Gilbert about whom I have already told you, were half-brothers.

When Sir Humphrey made his first voyage to America, Sir Walter was with him. After that, Sir Walter tried several times to send men to this country to make a settlement.

But those whom he sent found only great forests, and wild beasts, and savage Indians. Some of them went back to England; some of them died for want of food, and some of them were lost in the woods. At last Sir Walter gave up trying to get people to come to America.

But he found two things in this country which the people of England knew very little about. One was the potato, the other was tobacco.

If you should ever go to Ireland, you may be shown the place where Sir Walter planted the few potatoes which he carried over from America. He told his friends how the Indians used them for food, and he proved that they would grow in the Old World as well as in the New.

Sir Walter had seen the Indians smoking the leaves of the tobacco plant. He thought that he would do the same, and he carried some of the leaves to England. Englishmen had never used tobacco before that time, and all who saw Sir Walter puffing away at a roll of leaves thought that it was a strange sight.

One day as he was sitting in his chair and smoking, his servant came into the room. The man saw the smoke curling over his master’s head, and he thought that he was on fire.

He ran out for some water. He found a pail that was quite full. He hurried back and threw the water into Sir Walter’s face. Of course, the fire was all put out.

After that, a great many men learned to smoke. And now tobacco is used in all countries of the world. It would have been well if Sir Walter Raleigh had let it alone.