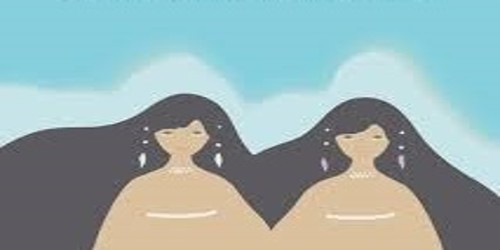 Many, many years ago, as the gentle spring winds came to the Capilano canyon at the edge of the vast Pacific, two daughters of the great chief known as Tyee reached womanhood. The river swelled, the leaves opened, and flocks of birds returned to the land after their long winter’s sojourn.

With the coming of spring, the great Tyee prepared a celebration in honor of his daughters, a celebration that would last for days.

There was just one sad note. The tribe of the great Tyee was at war with the people who lived farther north. Giant war canoes sliced through the waters of the coast, and the people chanted war songs.

As the time for celebration neared, the great Tyee decided he would put aside his battles for the week of his daughters’ feast. He would not allow the enemy to destroy this sacred tradition of his people.

A week before the great feast, the two daughters, hand in hand, came to their father. “Father, we want to ask something of you,” they said.

The great Tyee adored his daughters, and all his people recognized the strength and gifts of the women of the tribe. “Speak, daughters,” the chief said.

“Father,” the girls went on, “one day we may give birth to children who may become as great and powerful as you. We hope you will, in honor of us, do us one favor.”

The great Tyee smiled at his daughters. He would do anything they wished. “It is your privilege to receive any favor you want at this celebration. I promise you I will grant your request,” he said.

The girls felt brave when they heard their father’s words, and stepped closer. “We ask you, for our sakes, to invite the great tribe to the north, the tribe you wage war against, to our feast.”

The chief was shocked. “To our peaceful feast?” he asked. “Our feast in honor of women? Are you certain this is your wish?”

“It is,” the girls replied.

“Then you shall have your wish,” the chief replied, for he would never break his word.

The chief went at once to the young men of his tribe. “Build fires on the coast this evening at sunset,” he commanded them. “Build fires of welcome. Take your canoes and head north. Face our enemy and tell them that I, the Tyee of the Capilanos, command them to join me for a feast in honor of my daughters.”

The men at once prepared for their task, and that evening when the northern tribe received the invitation, they decided to accept. The tribe began making plans for their journey to the feast of peace.

As the day approached, the people of the north arrived in their canoes. They brought with them gifts of game and fish, beads, baskets, carvings, and woven rugs.

In return, the great chief gave a celebration such as no one had ever seen before. For days the people feasted and danced. The war canoes were emptied of weapons and filled with fresh salmon. People no longer sang war songs. Instead, they sang sweet melodies, and the children of the two tribes played games together.

As the celebration went on, the people saw that they were better off as friends, and by the week’s end, they vowed no longer to wage war on each other.

The Great Spirit hovered over the feast, for whether a deed was great or small, good or evil, the Great Spirit always knew, and when he saw the peace the two sisters had brought to the land, he smiled and said, “These maidens will be immortal, and they will live forever in a high place for bringing the gifts of peace and brotherhood to the land.”

The Great Spirit lifted the chief’s daughters to the highest place in the land. And ever since that day, the sisters sit atop the mountain crest, enduring and eternal. They are honored by all who live below.