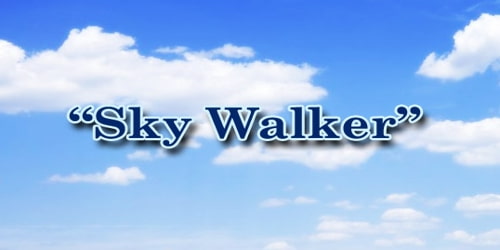 Long ago, there lived a young man known as Sky Walker. He was well-loved by his family, the pride of his people, but he was a rebellious boy. One night, Sky Walker refused to follow the tradition of his people. He would not fast during his coming-of-age ceremony. “You must follow your people’s ways,” his father insisted angrily, but still the young man refused.

“Then you must leave,” his father declared sadly, and he sent his son out to find his own way in the world.

That night was beautiful, unseasonably warm, with a sky so full of stars, the earth glowed. More light was coming, too, for, on the horizon, the full moon was rising. Sky Walker smiled at the lovely sight.

He was confident he would be fine. He knew he could look after himself, and he thought he might one day become famous for some marvelous feat. He fell asleep upon the soft earth, dreaming of his future, and smiling at the sight of the moon, which seemed to be shining her light directly on him.

He slept for a while, but suddenly he awoke, bathed in light. The light was so bright, he thought morning had dawned, but the light came from the beautiful young woman who stood before him.

“Who are you?” he whispered. He had never seen anyone quite so extraordinary.

“I am the Moon Goddess, and I have come for you,” she told him, and then she turned and walked away. Sky Walker followed her as if drawn by some mysterious force. And he watched in amazement as she began to rise, climbing with no effort at all into the sky. “I cannot follow you now,” he began, but his next step took him into the sky.

Up and up they climbed, the Earth below them growing smaller, the stars around them blazing so brightly, Sky Walker had to shield his eyes.

Eventually, they passed through a star-spangled gate and stood on a wide green plain where grass shimmered like emeralds. They continued on, passing streams of sparkling water and through stands of the tallest trees, Sky Walker had ever seen. Everywhere around them, colorful birds fluttered their wings and the sound of flutes filled the air. At the edge of the plain, Sky Walker saw a lodge much like his family’s lodge.

This they entered. Inside Sky Walker saw a young man surrounded by intricate embroideries and furs and ornaments of amazing beauty.

“Send him back to Earth at once,” the young man exclaimed, pointing at Sky Walker, but Moon Goddess just shook her head.

“No, he will live here with me. We shall marry,” she said sternly, and the man, seeing her determination, lighted a pipe and handed this to Sky Walker. “Since you are to marry my sister,” he said, “we shall share a pipe, and you will have my blessings.”

Then the young man stood up, and Sky Walker gasped at the figure, dazzling in his beauty, even more, extraordinary than his sister. “I am Sun God,” he said, “and now you shall live with us in our Sky World.”

The Sun God beckoned to Sky Walker to follow him. They crossed the beautiful Sky World, walking so fast, Sky Walker soon was hungry. “Is there any game here?” he asked the brother.

“Be patient,” said Sun God, and at last they reached a place where Sky Walker saw an enormous hole torn in the sky.

Sun God reached into the sack he carried and pulled out a silver ornament. This he hurled through the hole in the sky, and when Sky Walker looked down, he saw children racing to avoid the hurtling object. But one child fell, and the others rushed to him. They began to weep and wail. All the villagers looked up to the sky.

“Offer us a sacrifice!” Sun God thundered, “and your child will be healed.”

The people gathered around a fire and offered a rabbit to the gods. They roasted the animal, and as they did, it soared up to the sky and landed at Sky Walker’s feet. He was so hungry he instantly devoured it. And when he looked through the hole in the sky, he saw that the wounded child was healed.

That night he and the Moon Goddess married. For some time Sky Walker was happy in the sky, but presently he began to regret his rebellion. He wished to offer his apologies to his family. He told his wife he must return to Earth.

“Because you are happier with the cares of your poor world below than with our abundance above, you may return,” she said sadly. “But remember this: You are my husband. You must never marry another.” Then she clasped him by the waist, and they swept toward Earth. The movement rocked him to sleep.

Sky Walker woke in his father’s lodge, with all the members of his family surrounding him. They explained that he had been away for an entire year, though he had thought he had been gone only days.

The hunter’s life was difficult, and Sky Walker was often lonely. One day he met a woman of his tribe and fell in love, and he rejoiced when they married. But four days later, Sky Walker’s new bride was dead. Sky Walker ignored this warning from the gods, and one year later, he married again. Four days after this wedding, he stepped out of his lodge in the morning, and no one ever saw him again.

That night the forest filled with a strange light, and the people say that Sky Walker returned to the lodge of the Moon Goddess.

Ever since that time, they say, he has been obliged to live in the Sky World, at peace beside his wife and her brother, but always he watches over those who were his family on the Earth below.