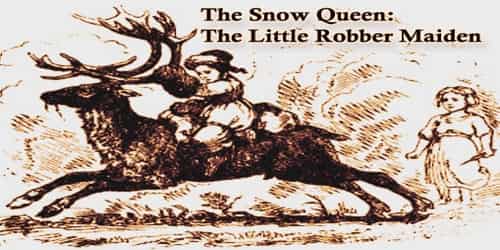 They drove through the dark wood, but the carriage shone like a torch, and it dazzled the eyes of the robbers so that they could not bear to look at it.

“Ties gold! Ties gold!” they cried; and they rushed forward, seized the horses, knocked down the little position, the coachman, and the servants, and pulled little Gerda out of the carriage.

“How plump, how beautiful she is! She must have been fed on nut-kernels,” said the old female robber, who had a long, scrubby beard, and bushy eyebrows that hung down over her eyes. “She is as good as a fatted lamb! How nice she will be!” And then she drew out a knife, the blade of which shone so that it was quite dreadful to behold.

“Oh!” cried the woman at the same moment. She had been bitten in the ear by her own little daughter, who hung at her back; and who was so wild and unmanageable, that it was quite amusing to see her. “You naughty child!” said the mother: and now she had not time to kill Gerda.

“She shall play with me,” said the little robber child. “She shall give me her muff, and her pretty frock; she shall sleep in my bed!” And then she gave her mother another bite, so that she jumped, and ran around with the pain; and the Robbers laughed, and said, “Look, how she is dancing with the little one!”

“I will go into the carriage,” said the little robber maiden; and she would have her will, for she was very spoiled and very headstrong. She and Gerda got in; and then away they drove over the stumps of felled trees, deeper and deeper into the woods. The little robber maiden was as tall as Gerda but stronger, broader-shouldered, and of dark complexion; her eyes were quite black; they looked almost melancholy. She embraced little Gerda, and said, “They shall not kill you as long as I am not displeased with you. You are, doubtless, a Princess?”

“No,” said little Gerda; who then related all that had happened to her, and how much she cared about little Kay.

The little robber maiden looked at her with a serious air, nodded her head slightly, and said, “They shall not kill you, even if I am angry with you: then I will do it myself”; and she dried Gerda’s eyes, and put both her hands in the handsome muff, which was so soft and warm.

At length, the carriage stopped. They were in the midst of the courtyard of a robber’s castle. It was full of cracks from top to bottom, and out of the openings magpies and rooks were flying; and the great bull-dogs, each of which looked as if he could swallow a man, jumped up, but they did not bark, for that was forbidden.

In the midst of the large, old, smoking hall burnt a great fire on the stone floor. The smoke disappeared under the stones and had to seek its own egress. In an immense caldron, the soup was boiling, and rabbits and hares were being roasted on a spit.

“You shall sleep with me to-night, with all my animals,” said the little robber maiden. They had something to eat and drink; and then went into a corner, where straw and carpets were lying. Beside them, on laths and perches, sat nearly a hundred pigeons, all asleep, seemingly; but yet they moved a little when the robber maiden came. “They are all mine,” said she, at the same time seizing one that was next to her by the legs and shaking it so that its wings fluttered. “Kiss it,” cried the little girl, and flung the pigeon in Gerda’s face. “Up there is the rabble of the wood,” continued she, pointing to several laths which were fastened before a hole high up in the wall; “that’s the rabble; they would all fly away immediately if they were not well fastened in. And here is my dear old Bac”; and she laid hold of the horns of a reindeer, that had a bright copper ring round its neck, and was tethered to the spot. “We are obliged to lock this fellow in too, or he would make his escape. Every evening I tickle his neck with my sharp knife; he is so frightened at it!” and the little girl drew forth a long knife, from a crack in the wall, and let it glide over the Reindeer’s neck. The poor animal kicked; the girl laughed and pulled Gerda into bed with her.

“Do you intend to keep your knife while you sleep?” asked Gerda; looking at it rather fearfully.

“I always sleep with the knife,” said the little robber maiden. “There is no knowing what may happen. But tell me now, once more, all about little Kay; and why you have started off in the wide world alone.” And Gerda related all, from the very beginning: the Wood-pigeons cooed above in their cage, and the others slept. The little robber maiden wound her arm round Gerda’s neck, held the knife on the other hand, and snored so loud that everybody could hear her; but Gerda could not close her eyes, for she did not know whether she was to live or die. The robbers sat round the fire, sang and drank; and the old female robber jumped about so, that it was quite dreadful for Gerda to see her.

Then the Wood-pigeons said, “Coo! Coo! We have seen little Kay! A white hen carries his sled; he himself sat in the carriage of the Snow Queen, who passed here, down just over the wood, as we lay in our nest. She blew upon us young ones, and all died except we two. Coo! Coo!”

“What is that you say up there?” cried little Gerda. “Where did the Snow Queen go to? Do you know anything about it?”

“She is no doubt gone to Lapland; for there is always snow and ice there. Only ask the Reindeer, who is tethered there.”

“Ice and snow are there! There it is, glorious and beautiful!” said the Reindeer. “One can spring about in the large shining valleys! The Snow Queen has her summer tent there; but her fixed abode is high up towards the North Pole, on the Island called Spitzbergen.”

“Do you choose to be quiet?” said the robber maiden. “If you don’t, I shall make you.”

In the morning Gerda told her all that the Wood-pigeons had said, and the little maiden looked very serious, but she nodded her head, and said, “That’s no matter. Do you know where Lapland lies!” she asked of the Reindeer.

“Who should know better than I?” said the animal; and his eyes rolled in his head. “I was born and bred there I leaped about on the fields of snow.”

“Listen,” said the robber maiden to Gerda. “You see that the men are gone, but my mother is still here, and will remain. However, towards morning she takes a draught out of the large flask, and then she sleeps a little: then I will do something for you.” She now jumped out of bed, flew to her mother; with her arms around her neck, and pulling her by the beard, said, “Good morrow, my own sweet nanny-goat of a mother.” And her mother took hold of her nose and pinched it till it was red and blue, but this was all done out of pure love.

When the mother had taken a sup at her flask, and was having a nap, the little robber maiden went to the Reindeer, and said, “I should very much like to give you still many a tickling with the sharp knife, for then you are so amusing; however, I will untether you, and help you out, so that you may go back to Lapland. But you must make good use of your legs; and take this little girl for me to the palace of the Snow Queen, where her playfellow is. You have heard, I suppose, all she said; for she spoke loud enough, and you were listening.”

The Reindeer gave a bound for joy. The robber maiden lifted up little Gerda, and took the precaution to bind her fast on the Reindeer’s back; she even gave her a small cushion to sit on. “Here are your worsted leggins, for it will be cold; but the muff I shall keep for myself, for it is so very pretty. But I do not wish you to be cold. Here is a pair of lined gloves of my mother’s; they just reach up to your elbow. On with them! Now you look about the hands just like my ugly old mother!”

And Gerda wept for joy.

“I can’t bear to see you fretting,” said the little robber maiden. “This is just the time when you ought to look pleased. Here are two loaves and a ham for you, so that you won’t starve.” The bread and the meat were fastened to the Reindeer’s back; the little maiden opened the door, called in all the dogs, and then with her knife cut the rope that fastened the animal, and said to him, “Now, off with you; but take good care of the little girl!”

And Gerda stretched out her hands with the large wadded gloves towards the robber maiden, and said, “Farewell!” and the Reindeer flew on over bush and bramble through the great wood, over moor and heath, as fast as he could go.

“Ddsa! Ddsa!” was heard in the sky. It was just as if somebody was sneezing.

“These are my old northern lights,” said the Reindeer, “look how they gleam!” And on he now sped still quicker day and night on he went: the loaves were consumed, and the ham too; and now they were in Lapland.