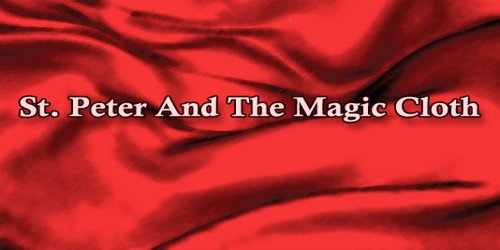 St. Peter And The Magic Cloth

One early spring evening, St. Peter, disguised as he usually was when he walked the Earth, stopped at a large, properous farmhouse. The wife was home alone, for her husband was away on business. “May a poor man take shelter for this night?” St. Peter asked, though of course, the woman had no way of knowing that this shabby man on her doorstep was a saint.

“No, try somewhere else,” she said coldly, for she was a selfish woman.

And so St. Peter wandered on until he came to a tiny, rundown cottage where a poor widow lived all alone. She was working hard at her loom, for she spun wool and wove fabric for a meager living. When St. Peter knocked and asked for shelter, she smiled warmly.

“I’ve little to offer, but I’ll willingly share,” she said, and she welcomed him inside.

And so St. Peter stayed the night, and the widow shared her frugal meal with him. The next morning, as St. Peter prepared to leave, he thanked her and said: “I have no money to pay you, but I will give you what I can, and it is this blessing. The first thing you do today, you will do all day long.”

The woman was puzzled by this, but she thanked the man and returned to her work. She began to measure the piece of weaving she had finished the previous day.

She began to measure and to count the yards, but when she reached 10 and thought she would reach the end, she was amazed to see the cloth did not end there. On she went, measuring and counting, and the longer she measured and the more she counted, the longer the cloth became.

Soon the whole cottage was full, and still, the cloth went on. She walked outside, for the cloth spilled out into the fresh springtime air. And she measured and counted, and still, it grew.

“How peculiar,” she said, “this cannot be,” but she had to keep measuring and counting, and before long the cloth ran all the way down the path from the cottage and out into the field and across the meadow.

As the sun was beginning to set, the rich farmer’s wife happened to pass by, and when she saw what the widow was doing, she stopped and said, “What sort of weaving is this you’ve made?”

The widow kept counting – 300, 301, 302 and she said to the farmer’s wife: “Well you should ask. A man came last night and lodged in my house, and when he went away he said that the first thing I began with this morning I would do the whole day long. Now I’ve been measuring cloth, and it seems never to end.”

When the farmer’s wife heard this, she realized how foolish she had been to turn away the man at her door. She quickly hurried home, vowing that if he passed her way again, she would welcome him inside and ask for a blessing as pay.

As for the widow, she took the cloth to market the next day, though the cloth was so huge, it filled three whole carts. She sold her cloth at the market and returned home with enough money to last her the rest of her days.

The rich farmer’s wife prepared for her visitor, waiting and hoping each day that he would come to her door. She bought a fine piece of cloth and placed this in her loom, and she lay a measure atop it, so prepared, was she.

At last, late one night, she heard a knock on the door. Sure enough, there stood the old man, and he asked for lodging.

“Of course, please come in,” the farmer’s wife said, and she curtseyed and set a fine table and prepared a big, comfortable bed.

In the morning as the old man prepared to leave, the woman tapped him on the shoulder. “One moment, please,” she said, “when you were sheltered at my neighbor’s house, you gave her a blessing. I would like the same blessing, please.”

St. Peter smiled. “Of course. The first thing you do today when I am gone you shall do the whole day. But be certain you think hard.”

The farmer’s wife thanked him and turned to go to her loom, but just then she remembered she would like a cup of tea. She went out to the well to draw some water for her kettle and began to pump.

Well, you can imagine what happened. She began pumping, and the water rushed up out of the well, but she could not stop. All-day long she pumped water, and on the water flowed until it filled the whole yard and rose higher and higher and rushed into the house.

The woman cried for help, but she had never helped her neighbors in trouble, and so no one came. By sunset, she was floating in the water she had drawn, and the cloth and the measure and all her furniture floated around her, and for all anyone knows, there she floats still.