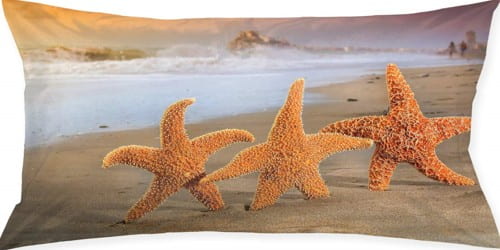 Once upon a time, a young man lived by the sea. He often sat overlooking the water and watching the waves rolling onto the shore. He loved the sea’s strength and fury and especially loved the dawns when light haloed the nearby hilltops and the sea creatures woke from their sleep.

He was a private man. He seldom spoke to others and hoarded the beauty of his seaside world to himself. He prided himself on his love of solitude and began to think of himself as a kingly sort, a man who understood the very heart of the world.

One day at dawn the man set off on a walk along the beach. He barely noticed the debris cast upon the shore by great waves from a storm the previous night. He was dazzled by the blaze of light rising, by the tart smell of the saltwater, and by the feel of the soft sand on his bare feet.

All the while he was thinking of his own place in the world. He looked around and saw no other soul, and thought he must be very important. After all, as far as he could tell, he was the only living being upon this whole stretch of beautiful beach.

Suddenly, to his astonishment, the young man noticed a figure in the distance. The figure seemed to be dancing on the shore, for it weaved this way and that, stooping, then running into the waves. The man quickened his pace. “Who can this be?” he said out loud. “Who dares to dance on my beach?”

When he neared the figure, he saw it was a little girl. Her frantic movements puzzled him. She bent and scooped something into her hand, and then she ran into the waves and tossed whatever it was she held over the breakers. He quickened his pace and soon saw what the little girl was doing. She was picking up the starfish that lay upon the sand.

“Excuse me,” he said softly, for he did not want to startle the child.

“Yes?” she said breathlessly, though she never stopped moving. She glanced up at him, and he was dazzled by the look in her eyes. She seemed to be of another world. Her eyes sparkled more brightly than the stars, and her limbs were so strong and sturdy she hardly seemed a small child.

Before he could say another word, she had picked up another starfish and run to the waves to toss the creature into the sea.

“I just wonder what you are doing,” he said gently, for he still believed she must be from far away, so strange did she seem. And besides, he had come to think of himself as the owner of this piece of the world.

“The starfish,” she said quickly, “they have been washed ashore during the night.”

“Of course they have,” the man said. This was no strange thing at all. The night waves brought a host of things onto the shore. He felt wiser than this foolish little girl.

“I’m saving them,” the little girl said. “If they are left upon the shore they will die.” And again she reached down, picked up a starfish and ran through the waves, tossing the starfish as far as she was could. Then she dashed back to the beach to get another.

The man began to laugh. What a silly child, he thought. He looked around at the beach and saw hundreds and hundreds of starfish lying in the sand beneath the sun that was now beginning to rise.

“Why are you laughing?” the girl asked as she scooped up yet another starfish.

The man laughed again. “There are thousands of starfish in the sand,” he said.

The man roared with laughter. “How can you think you can make any difference?” he asked. “You can run all you like, but you must see that you’re making no difference at all.”

Holding a starfish in her hand, the girl hesitated only a moment to look at the man with her strange, sparkling eyes. Then she ran to the waves and tossed this starfish into the sea. She hurried back to the young man. “There,” she said.

“I made a difference to that one,” she said, and she picked up another starfish, continuing her dance.

The man stood a while longer watching her. Soon he felt a tear lodge in his eye. Of course, he thought. She was right. If anyone was silly, it was he to think that he might not offer his hand to the other creatures of this world.

As he watched her dance, he reached down and picked up a starfish. Before long he was breathlessly working to save as many of the creatures as he could.

From that day on, the young man gave up thinking of himself as a king and hoped only to be as generous as the little dancing child who made a difference to the starfish.