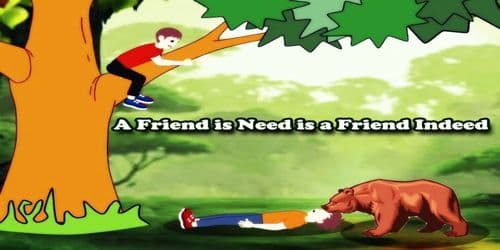 Story Of A Friend is Need is a Friend Indeed

One day in the evening two friends were passing through a jungle. They were very intimate with each other. There lived many wild beasts in the Jungle. After walking for some time they saw a bear coming out of the jungle. They became afraid of the bear. One of the friends at once climbed up a tree. The other friend did not know how to climb a tree. He was sure that the bear would tear him into pieces. Suddenly he remembered that the bear does not eat a dead animal.

So he lay down on the ground just like a dead man. The bear came to him and smelt his body. The friend Stopped breathing. The bear thought that he was dead and went away. Then the first friend got down from the tree and came to the second friend. He said to him, “What did the bear whisper to you?” He said, “The bear told me not to trust such a friend who runs away leaving his friend in danger. Because a friend in need is a friend indeed.”

Moral of the story: ‘True Friend is the one who always supports and stands by you in any situation.’