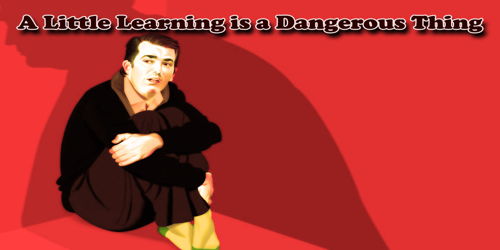 Story Of A Little Learning is a Dangerous Thing

Once there lived a man in a village. He had a great attraction for English and so he went to a teacher. The teacher began to teach him, but the man was dull-headed. The man could not understand the rules of grammar. After a long effort of the teacher, the man learned only three words. They were ‘Yes’, ‘No’ and ‘Very good’. With these three words, he came to his village. He thought he learned quite a lot of English. He began using these three English words most of the time irrelevantly. He did not think whether they were contextually right or wrong. He just used them everywhere.

One night a theft was committed in the village. The following day the police came to the village. He asked the man whether he knew about the theft. He answered in his usual way ‘Yes’. The police asked him to tell the police about the theft. But the man said ‘No’. At this, the police had a doubt in him but they did not want to arrest him. Then they arrested him and told him to go to the police station with them. He just told them “Very Good”. Thus the man fell in danger. He was sent to prison for his little knowledge.

Moral of the story: ‘A Little Knowledge is a Dangerous Thing.’