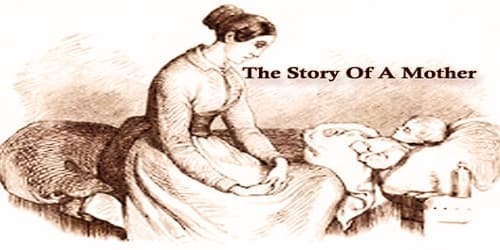 The Story Of A Mother

A mother sat there with her little child. She was so downcast, so afraid that it should die! It was so pale, the small eyes had closed themselves, and it drew its breath so softly, now and then, with deep respiration, as if it sighed; and the mother looked still more sorrowfully on the little creature.

Then a knocking was heard at the door, and in came a poor old man wrapped up as in a large horse-cloth, for it warms one, and he needed it, as it was the cold winter season! Everything out-of-doors was covered with ice and snow, and the wind blew so that it cut the face.

As the old man trembled with cold, and the little child slept a moment, the mother went and poured some ale into a pot and set it on the stove, that it might be warm for him; the old man sat and rocked the cradle, and the mother sat down on a chair close by him, and looked at her little sick child that drew its breath so deep, and raised its little hand.

“Do you not think that I shall save him?” said she. “Our Lord will not take him from me!”

And the old man it was Death himself he nodded so strangely, it could just as well signify yes as no. And the mother looked down in her lap, and the tears ran down over her cheeks; her head became so heavy she had not closed her eyes for three days and nights; and now she slept, but only for a minute, when she started up and trembled with cold.

“What is that?” said she, and looked on all sides; but the old man was gone, and her little child was gone he had taken it with him; and the old clock in the corner burred, and burred, the great leaden weight ran down to the floor, bump! And then the clock also stood still.

But the poor mother ran out of the house and cried aloud for her child.

Out there, in the midst of the snow, there sat a woman in long, black clothes; and she said, “Death has been in thy chamber, and I saw him hasten away with thy little child; he goes faster than the wind, and he never brings back what he takes!”

“Oh, only tell me which way he went!” said the mother. “Tell me the way, and I shall find him!”

“I know it!” said the woman in the black clothes. “But before I tell it, thou must first sing for me all the songs thou hast sung for thy child! I am fond of them. I have heard them before; I am Night; I saw thy tears whilst thou sing’s them!”

“I will sing them all, all!” said the mother. “But do not stop me now I may overtake him I may find my child!”

But Night stood still and mute. Then the mother wrung her hands, sang and wept, and there were many songs, but yet many more tears; and then Night said, “Go to the right, into the dark pine forest; thither I saw Death take his way with thy little child!”

The roads crossed each other in the depths of the forest, and she no longer knew whither she should go! Then there stood a thorn-bush; there was neither leaf nor flower on it, it was also in the cold winter season, and ice-flakes hung on the branches.

“Hast thou not seen Death go past with my little child?” said the mother.

“Yes,” said the thorn-bush; “but I will not tell thee which way he took unless thou wilt first warms me up at thy heart. I am freezing to death; I shall become a lump of ice!”

And she pressed the thorn-bush to her breast, so firmly, that it might be thoroughly warmed, and the thorns went right into her flesh, and her blood flowed in large drops, but the thorn bush shot forth fresh green leaves, and there came flowers on it in the cold winter night, the heart of the afflicted mother was so warm, and the thorn-bush told her the way she should go.

She then came to a large lake, where there was neither ship nor boat. The lake was not frozen sufficiently to bear her; neither was it open nor low enough that she could wade through it, and across it, she must go if she would find her child! Then she lay down to drink up the lake, and that was an impossibility for a human being, but the afflicted mother thought that a miracle might happen nevertheless.

“Oh, what would I not give to come to my child!” said the weeping mother; and she wept still more, and her eyes sunk down in the depths of the waters, and became two precious pearls; but the water bore her up, as if she sat in a swing, and she flew in the rocking waves to the shore on the opposite side, where there stood a mile-broad, strange house, one knew not if it were a mountain with forests and caverns, or if it were built up; but the poor mother could not see it; she had wept her eyes out.

“Where shall I find Death, who took away my little child?” said she.

“He has not come here yet!” said the old grave woman, who was appointed to look after Death’s great greenhouse! “How have you been able to find the way hither? And who has helped you?”

“Our Lord has helped me,” said she. “He is merciful, and you will also be so! Where shall I find my little child?”

“Nay, I know not,” said the woman, “and you cannot see! Many flowers and trees have withered this night; Death will soon come and plant them over again! You certainly know that every person has his or her life’s tree or flower, just as everyone happens to be settled; they look like other plants, but they have pulsations of the heart. Children’s hearts can also beat; go after yours, perhaps you may know your child’s; but what will you give me if I tell you what you shall do more?”

“I have nothing to give,” said the afflicted mother, “but I will go to the world’s end for you!”

“Nay, I have nothing to do there!” said the woman. “But you can give me your long black hair; you know yourself that it is fine and that I like! You shall have my white hair instead, and that’s always something!”

“Do you demand nothing else?” said she. “That I will gladly give you!” And she gave her fine black hair and got the old woman’s snow-white hair instead.

So they went into Death’s great greenhouse, where flowers and trees grew strangely into one another. There stood fine hyacinths under glass bells, and there stood strong-stemmed peonies; there grew water plants, some so fresh, others half sick, the water-snakes lay down on them, and black crabs pinched their stalks. There stood beautiful palm-trees, oaks, and plantains; there stood parsley and flowering thyme: every tree and every flower had its name; each of them was a human life, the human frame still lived one in China and another in Greenland roundabout in the world. There were large trees in small pots so that they stood so stunted in growth and ready to burst the pots; in other places, there was a little dull flower in rich mold, with moss round about it, and it was so petted and nursed. But the distressed mother bent down over all the smallest plants and heard within them how the human heartbeat; and amongst millions, she knew her child’s.

“There it is!” cried she, and stretched her hands out over a little blue crocus, that hung quite sickly on one side.

“Don’t touch the flower!” said the old woman. “But place yourself here, and when Death comes I expect him every moment do not let him pluck the flower up but threaten him that you will do the same with the others. Then he will be afraid! He is responsible for them to ‘Our Lord’, and no one dares to pluck them up before He gives leave.”

All at once an icy cold rushed through the great hall, and the blind mother could feel that it was Death that came.

“How hast thou been able to find thy way hither?” he asked. “How couldst thou come quicker than I?”

And Death stretched out his long hand towards the fine little flower, but she held her hands fast around his, so tight, and yet afraid that she should touch one of the leaves. Then Death blew on her hands, and she felt that it was colder than the cold wind, and her hands fell down powerless.

“Thou canst not do anything against me!” said Death.

“I only do His bidding!” said Death. “I am His gardener, I take all His flowers and trees, and plant them out in the great garden of Paradise, in the unknown land; but how they grow there, and how it is there I dare not tell thee.”

“Give me back my child!” said the mother, and she wept and prayed. At once she seized hold of two beautiful flowers close by, with each hand, and cried out to Death, “I will tear all thy flowers off, for I am in despair.”

“Touch them not!” said Death. “Thou says that thou art so unhappy, and now thou wilt makes another mother equally unhappy.”

“Another mother!” said the poor woman, and directly let go her hold of both the flowers.

“There, thou hast thine eyes,” said Death; “I fished them up from the lake, they shone so bright; I knew not they were thine. Take them again, they are now brighter than before; now look down into the deep well close by; I shall tell thee the names of the two flowers thou wouldst have torn up, and thou wilt see their whole future life their whole human existence: and see what thou wast about to disturb and destroy.”

And she looked down into the well; and it was a happiness to see how the one became a blessing to the world, to see how much happiness and joy were felt everywhere. And she saw the other’s life, and it was sorrow and distress, horror, and wretchedness.

“Both of them are God’s will!” said Death.

“Which of them is Misfortune’s flower and which is that of Happiness?” asked her.

“That I will not tell thee,” said Death; “but this thou shalt know from me, that the one flower was thy own child! it was thy child’s fate thou saw thy own child’s future life!”

Then the mother screamed with terror, “Which of them was my child? Tell it to me! Save the innocent! Save my child from all that misery! Rather take it away! Take it into God’s kingdom! Forget my tears; forget my prayers and all that I have done!”

“I do not understand thee!” said Death. “Wilt thou have thy child again, or shall I go with it there, where thou dost not know!”

Then the mother wrung her hands, fell on her knees, and prayed to our Lord: “Oh, hear me not when I pray against Thy will, which is the best! Hear me not! Hear me not!”

And she bowed her head down in her lap, and Death took her child and went with it into the unknown land.