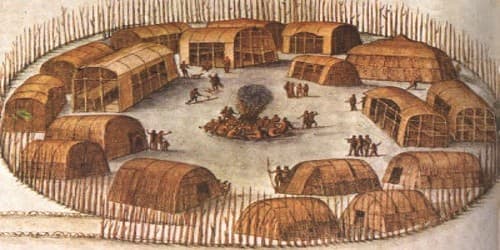 The Story of Night

The Story of Night (A Legend of the Mundurucu Indians)

Long ago the Great Serpent lived beneath the sea. His only daughter married a young man and lived with him on the land. In those days, there was no difference in night or day, for it was always light.

One day the young man awoke restless and unhappy. “What makes you sad?” his wife asked.

“There is too much light here,” he said. “It is difficult to sleep.”

The daughter of the Great Serpent decided to share a secret. “My father keeps the key to darkness in his home under the sea. Let us ask him if he will share his darkness with us.”

The woman and her husband called the villagers together and told them of their plan. Soon afterward a party of men assembled. They would go to the Great Serpent to ask him for the key to the darkness.

The men climbed into their canoes and paddled for many days to reach the home of the Great Serpent. When they arrived, they bowed down before him.

“Your daughter and her husband ask that you give them the key to darkness,” the men said.

The Great Serpent loved his daughter, and so he welcomed the men. He handed them the nut of the tucuma palm. “Night is the keeper of darkness,” the Great Serpent told the men. “Night is trapped inside this nut. Take it to my daughter. She will know how to set Night free. But make certain you do not open the nut before you arrive at my daughter’s home.”

The men thanked the Great Serpent. After they had carefully set the nut in one of the canoes, they traveled down the long, winding river toward home.

As they journeyed, they heard sounds coming from the nut. “That must be the sound of Night,” they said. “Shhh. Listen.”

The night began to scratch at the shell, and the men leaned close. They pressed their ears to the shell and heard Night calling to them. “Set me free!”

The men listened, but they did not understand Night’s language. They shrugged and paddled on. The scratching and crying continued.

“Perhaps we should open the nut,” one of the men said. “It sounds very sad.”

“The Great Serpent forbade us to open the nut,” another said.

“We must obey the Great Serpent,” the men agreed.

The scratching grew louder and the cries more mournful. The sounds echoed across the river, waking the sleeping monkeys, who cried out in response. The forest shook with piercing wails.

The men plugged their ears with leaves to keep out the horrible sounds.

“Oh,” one of the men shouted over the noise. “These sounds are dreadful. Something may be wrong with Night. We should find out if Night is hurt.”

Again the wailing came, louder than ever. Again the animals of the rain forest cried back. The river seemed endlessly long to the paddlers.

The men stared at the nut. “We must see if Night is all right,” one man said.

At last, the others agreed, for they could not bear the terrible wailing.

The men carrying the nut pulled to shore and tied their canoe to a tree. They built a fire to heat the nut so that they might open it with ease. They held the nut over the fire, careful not to burn its shell. The shell began to crack, and then it split wide open.

Night instantly flew out and cloaked the men in its embrace. And with Night came Night’s insects. The men were surrounded. Everywhere they looked they saw creatures –winged and crawling creatures, creatures sheer as silk, soft as cotton, furry and hairy, hovering in packs and whizzing past their heads.

The men ducked from the attacks. They swatted and slapped. They covered their eyes and plugged their ears, but nothing they could do would stop the swarms. They plunged into the water and guided their canoe to join the others.

Back at the village, the Great Serpent’s daughter sat up suddenly in her hammock. “I can feel it,” she cried. “I feel Night coming near. The men have set Night free.”

She gazed at the river before her. She could see the sky on the far shore growing dark, leaving only a rim of light along the crest of the horizon. And as she watched, she heard the sound of the rippling water as the men paddled closer. As they neared the village she saw Night chasing them, enfolding them in its arms, swallowing the world around them.

When the men arrived onshore, they bowed before the Serpent’s daughter. “We confess, we opened the nut your father gave us. The night is free.”

The young woman was heartbroken. She looked at the men. “I am afraid you shall be punished,” she said.

The jungle lowlands of eastern South America were settled sometime after 3000 B.C., according to archaeologists who have found no evidence of earlier peoples. Among the many small groups in this region are included the Mundurucu, the Makiritare, the Yanomamo, the Tupinamba and the Cayapo.

The population was always sparse, clustered along riverbanks. Fish and manioc were dietary staples. The people lived in thatch houses and slept in hammocks, ornamenting their bodies with paintings. The story of Night, attributed to the Mundurucu, is told in slightly different versions by other peoples of the area.