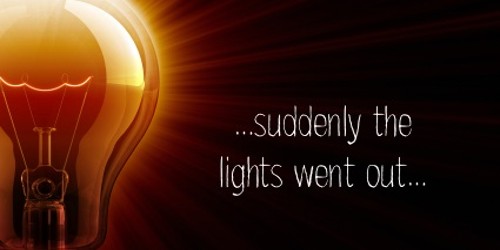 Suddenly, the lights went out – a Story

Suddenly, the lights went out – a Story

It was a warm summer night. It was dark and eery the abandoned house without the lights. Suddenly, the lights went out and everything went dark. I tried to pull myself together and find a source of light. I could barely see anything and resorted to waving my arms in front of me to avoid bumping into any furniture. The bright moon was high in the clear sky. My first thought was that there was a power disruption due to the thunderstorm brewing outside. There were no lights in any of the windows. Instinct led me to the kitchen cabinet where I could remember my mother storing some candles for emergencies. All the inhabitants were asleep.

I was alone at home as all the members of my family had fine to another city to attend a marriage function. After a considerable amount of groping, the tips of my fingers came into contact with a waxy candle. I grabbed it immediately with relief and quickly lit it. Then, I noticed that my neighbor’s lights were on. This discarded my first notion of the power shortage due to the storm.  I screamed out in horror and that thing disappeared in a flash. I began to ponder what could be the cause of the blackout. Then, I remembered my father showing me a lamp in his room which used to cause the electrical supply in the house to go haywire for some inexplicable reason. However, I was not scared, as this was not the first time I had been alone.

I rushed to my father’s room and inspected the lamp but found that it was disconnected. The sound of something being moved around upstairs instantly diverted my attention. The hairs behind my neck stood on ends. To ensure I was not seen by whoever was in the house, I quickly blew the flame off my candle.

I furtively moved under the kitchen table and remained as quiet as a bat. The intruder went out of sight but I could hear his faint footsteps on the wooden staircase. Thoughts of me getting kidnapped crept uneasily into my mind. No more than a second later, I saw the garage door plowed down by my neighbor, Mr. Vasu. As the lightning flashed, he saw me hiding and hastily led me out of the house and into his.

Everything seemed to happen at lightning speed. Mrs. Vasu tried to calm me down and explained to me that Mr. Vasu happened to see the thief rummaging the bedroom facing theirs. Apparently my parents had asked him to keep an eye on me while they were away.

When I woke up the next morning, my parents were at Mr. Vasu’s house thanking him for rescuing me. From their conversation, I gathered that the thief managed to flee when he heard Mr. Vasu storming through the door. Nevertheless, I was extremely grateful to Mr. Vasu and will forever be indebted to him. I decided not to tell anyone about this incident, as I knew they would all laugh at me.