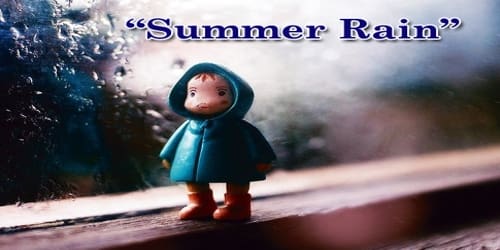 Once upon a time in the kingdom of the stars, there lived a beautiful princess, daughter of the powerful king of Heaven. The princess of the stars was known far and wide as a wonderful weaver. Whenever she sat at her loom to work, people gathered, for no one had the skill she had, no one could create such magnificent pictures. Everyone called the girl Weaving Maid.

One day a neighbor was admiring one of Weaving Maid’s beautiful tapestries when she suddenly gasped. She had spotted something nearly hidden amid the images of flowers, birds, trees, and streams. “There’s a face,” the neighbor said, and the king, peering to see, now saw what his daughter had woven. There, in the middle of her tapestry, was the face of a handsome young man.

“Who’s that?” the king cried, but Weaving Maid shrugged and said softly, “I do not know, Father. I did not plan to weave a face.”

The king called together all his advisers. “Who is this man,” the king asked, “and what is the meaning of this tapestry?”

The advisers were wise and thoughtful. They knew the meaning of the tapestry. “Your daughter is ready to marry,” they told the king.

“Ah,” the king said, for, like many fathers, he had not noticed that his daughter was no longer a child. He thought of her as a young girl, but now he understood his daughter had grown to be a young woman. “Yes,” he said, “my daughter shall marry. But who is good enough to marry her?”

Once again the advisers studied the face in the tapestry, and they knew. “She must marry the young prince who tends the cattle,” they said. “He is a fine young man, and this,” they pointed to the tapestry, “is his face.”

Still, the king worried. Weaving Maid was, after all, his only daughter, and so he consulted the fortune-tellers.

“Herd Boy is the perfect match for your daughter,” the fortune-tellers told the king. So he sent for the prince to come to meet his daughter.

When Weaving Maid and Herd Boy met, they looked into each other’s eyes and fell in love. Everyone in the palace could see that they adored each other. Their parents agreed that they would wed.

On their wedding day, the king offered his blessing, and all the parents offered their wisdom.

“You will be happy together,” they said, “so long as you remember that you must tend to your duties. Each of you has a gift, and you must remember to use your gifts for the benefit of the world around you.”

Weaving Maid and Herd Boy were the happiest couples anyone had ever seen. They loved spending their time together. They walked through the fields of stars. They laughed and sang and told each other tales.

At first, they heeded their parent’s advice, but as time went by, Herd Boy spent less and less time tending his cattle and Weaving Maid no longer sat at her loom. The cattle grew ill; the loom grew brittle.

Time passed, and the cattle began to die in the fields. People complained to the king about the tapestries they needed that were promised and never provided. The world of the stars grew bleak.

And so the king called Herd Boy and Weaving Maid to his palace. “You have disobeyed your parent’s commands,” the king said sternly, “and so from this day on you must live separately.” With that, he sent Herd Boy to the west to tend to his cattle and his daughter to the east where she would weave from dawn to dusk.

“Please do not separate us, Father,” begged Weaving Maid as they parted. Herd Boy cried in anguish, “You cannot do this to us. We cannot be apart forever.”

Their sorrow broke the king’s heart, and so he offered them a compromise. “Both of you must go to your separate parts of the world. Both of you must do your work. But if you work hard all year, you will be permitted one night each year to meet.”

As Herd Boy and Weaving Maid were parted, they wept. They could not stop weeping, and their tears fell so fast, they filled the rivers on Earth.

One year passed, and the night they were to meet at last arrived. But as they tried to journey toward their meeting place, they came to the Milky Way. It was so vast and so wide, they could not cross.

When the animals on Earth saw this, they knew they must help. “If our prince and princess do not meet, the Earth will surely flood,” and so they sent the magpies to the sky to form a bridge the lovers could cross.

Ever since that day, every year in July, the magpies fly to the heavens to make a bridge over the Milky Way. Every year Herd Boy and Weaving Maid meet, and when they first see each other, their tears of joy sprinkle the Earth. If you are outside on that night, you will feel their tears as soft, gentle dew falling on your face.