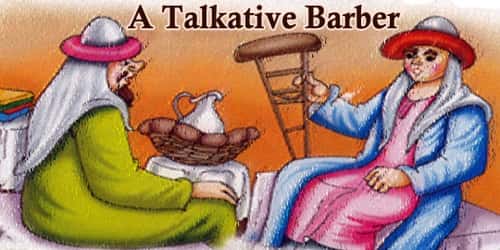 Once upon a time, there was a tailor in a city. He was jolly and broad-minded. He used to call the people to his house and narrated them amazing stories. People listened to his stories with great interest.

There was a barber’s shop near his store. The barber was very talkative. People knew his habit of gossiping and often enjoyed his gossips.

The tailor asked him, “Why are you so angry with him?”

The stranger took a long breath and narrated his story to the tailor: “my father was a rich businessman of Baghdad. After his death, I was the only heir to all the wealth he possessed. I was a bachelor to the core and did not like a woman.”

One day while I was passing along a road, I saw a beautiful girl standing at the window of a house. I fell in love with her at first sight. At the same time, I guessed him as the father of the girl and quickly left the place, but could not forget the girl. I wanted to marry her. I disclosed my love for one of the friends of my mother. She said, “I know the girl. She is too proud and her father is the judge of the District Court. You may never be able to win her heart. But do not worry. I will help you and talk to her.”

She went to the girl and expressed my desire to her. But the girl did not want to meet me. But after much persuasion, she called me on Friday after her father had gone to the mosque for prayer.

I was very happy and eager to meet her. I got up early in the morning on Friday. I called this barber to shave my beard. I asked him to finish his work quickly, but the barber was talking continuously. I scolded him and said, “Hurry up; I have to go to meet someone.”

But the barber did not care at all. Leaving the shave in between, he went out to see the sun and came back after some time. He said, “Today is not a good day for you and hence, do not go out to meet anyone.”

I shouted at him, “Stop talking nonsense! Finish your work and go away.”

But the barber continued absurdly and said, “I am not an ordinary barber. I know all about the future. I want to help you.”

I asked him, “Go away and never come again.”

But the barber did not go. He waited for some time and again said, “My master, I came here only when you called me. I will shave your beard and then I will come with you.”

Then he started shaving my beard. But he kept on talking continuously. He asked me, “Tell me where you are going.”

“I did not want to tell him the truth. Hence, I lied that I was going to meet my friends. I had been ill and now had recovered. So I wanted to treat my friends. It would be a big feast.”

Suddenly, he stopped shaving and said seriously, “Master, I have also invited my friends for a feast today. I forgot that I had to purchase some food from them.”

“Be quick, I will give you food for your friends. Finish your work fast,” I said since I was in a hurry.

Without waiting for a reply, he started dancing, and said, “Come to my house and enjoy the company of my friends. They will entertain you. Visit your friends some other day.”

I laughed at him. He was too talkative. I told him, “I would be very happy to go to your house. But today it is not possible because I have to meet my friends. I will come to your house some other time.” The barber said, “It does not matter if you cannot come to my house. I would like to accompany you to your friends. I will give food to my friends.” I cried, “Be quick and shave.”

At last, he shaved my beard. I told him, “My servants will give you food for your friends, you can take my servants with you and go now.” He went away. I got ready and left to meet the girl. I was happy to meet her. It was not in my knowledge that the barber had followed me. Soon we realized that her father had returned earlier than usual. She was surprised. When I peeped from the window, I saw the barber sitting across the road.

Meanwhile, her father entered the house. He got angry with his servant on some matter and started beating him. The servant cried in pain.

The loud cry, made the barber think that “I was being beaten, hence he shouted for help. People gathered around the girl’s house. The barber asked her father why was he beating his master, i.e. me. The father could not understand anything and said, “What nonsense are you talking about? Who is your master? I do not know your master.”

The barber said, “My master is with your daughter. Do you know they love each other? I thought you have asked your servants to beat my master. Anyway, leave my master.”

The girl’s father said, “There is no one in my house. Come inside and see for yourself.” The barber entered the house along with the people gathered and started searching for me everywhere. I had hidden inside a box, but the barber noticed it. He opened the box and found me there. He shouted and attracted the attention of the people. I jumped from the box and ran out of the house.

As I was in a hurry, I collided with a stone and fell on the ground and broke my leg. Since then, I am a cripple. The people started following me and to stop them, I threw gold and silver coins behind me. Though the other people stopped to pick the coins, the barber continued to follow me. Seeing the barber behind me, I took shelter in an inn and asked the owner not to allow the barber to enter. He stopped the barber on the gate. Since then I hate the barber. He has spoiled my life.

After this, the stranger got up and went away.

Thereafter, the tailor asked the barber “Was this man feeling the truth?” The barber said, “He was right. I tried to help him but he hated me. I wanted to make his love story public and out of shame, the judge would have allowed him to marry his daughter. But he did not understand me.”