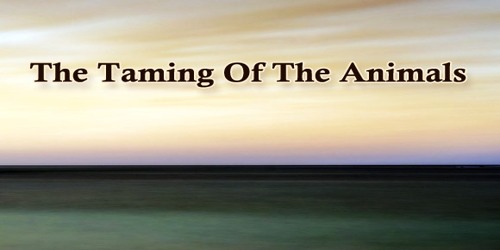 The Taming Of The Animals

Once upon a time, there lived a miller who planned to marry. He wanted his wedding to be the finest wedding anyone had ever seen, and so he invited every person in the village to attend. He also invited every animal: the bear, the wolf, the fox, the horse, the goat and sheep, and reindeer. The animals were surprised by the invitation, but all of them responded. “We’ll be there,” they said.

On the morning of the wedding, the bear started off early, for he always liked to be on time. As he trudged down the road, he passed a young man who was walking in the opposite direction.

“Where are you going?” asked the young man.

“To the miller’s wedding,” the bear proudly replied. “Of course I’d rather stay home and hibernate, but the miller asked me, and I do not want to be rude.”

The young man shook his head. “Don’t go,” he said. “If you do, they’ll want to kill you and strip your fur to make thick rugs for their parlors.”

Hearing this, the bear shivered. “If you’re certain that’s true,” he said, “I’d better go home,” and he turned around and lumbered back to his lair.

The young man walked on, but before he had gone far, he passed the wolf, who was on his way to the wedding.

“If you’re going to the miller’s wedding,” the young man said, “I pray you’ll change your mind. Your fur is thick and warm, and they’ll surely want to kill you and make themselves warm coats.”

The wolf was astonished to hear this, but he had to admit, his fur was lovely indeed. He decided he would take the man’s advice, and turned back toward his home.

Next, the young man came upon the fox, whose red coat shone in the bright winter sun. “I can see you’re on your way to the miller’s wedding, and I must warn you,” said the man. “The miller has great dogs who are bound to attack you the moment you arrive.”

The fox thought about this. “I have heard of such things,” he said, and he turned and trotted home.

The moment the fox was out of sight, the young man heard a crashing in the woods, and suddenly the horse galloped past, his mane blowing in the brisk winter wind, his coat glistening. “I’m late, I’m late,” he neighed.

“Stop!” the boy called. “Don’t go to the miller’s wedding. If you do, you’ll never gallop through these woods again. The miller’s men will catch you and put you to work in their fields.”

The horse whinnied proudly. “All the men in the world could not hold me,” said the horse. “I’m as strong as a hundred men.” And with that, he flicked his tail and galloped on toward the miller’s house.

When the horse reached the miller’s house, everything happened just as the young man had predicted. Some men threw a rope around his head, and they thrust a bit between his teeth. The poor horse struggled, but he was not strong enough to break free, and the men led him to the stable. There they shut him up for so many days. His coat lost its gloss and his spirits sagged.

After that, the miller harnessed him to a plough, and for the rest of his days, he walked back and forth across the miller’s fields, always thinking of the young man who had tried to warn him, wishing he had not been so proud.

The young man tried to warn others, too. When he happened upon the cow dressed with a garland of flowers round her neck and plodding toward the miller’s place, he said, “Don’t go to the wedding, for once they’ve tasted your milk, they’ll never let you go.”

“Silly boy,” the cow said, “nobody will keep me against my will.” She went on her way, and naturally all turned out just as the young man had predicted. The cow spent the rest of her days in the stable, providing milk for the miller’s family and his neighbors.

The young man also tried to warn the goat and the sheep, but neither of them listened, and they too spent the rest of their days in the miller’s barn.

When the young man passed the reindeer, he said, “Please don’t go to the miller’s wedding. No one is as swift and strong as you, reindeer. The miller will surely want to keep you for his own. He’ll harness you and break your spirit.”

“That may be,” said the reindeer thoughtfully, and he turned and bounded away.

Not one of the animals who ignored the young man’s advice ever lived in the forest again. They became the servants of man. That, you see, is what happens when conceit blinds you to the truth.