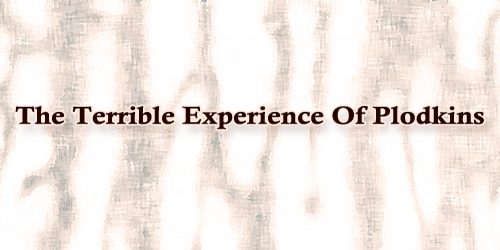 The Terrible Experience Of Plodkins

“Which life or death? It is a gambler’s chance!

Yet, unconcerned, we spin and dance,

On the brittle thread of circumstance.”

I understand that Plodkins is in the habit of referring sceptical listeners to me, and telling them that I will substantiate every word of his story. Now, this is hardly fair of Plodkins. I can certainly corroborate part of what he says, and I can bear witness to the condition in which I found him after his ordeal was over. So I have thought it best, in order to set myself right with the public, to put down exactly what occurred. If I were asked whether or not I believe Plodkins’ story myself, I would have to answer that sometimes I believe it, and sometimes I do not.

Of course, Plodkins will be offended when he reads this, but there are other things that I have to say about him which will perhaps enrage him still more; still, they are the truth. For instance, Plodkins can hardly deny, and yet probably he will deny, that he was one of the most talented drinkers in America. I venture to say that every time he set foot in Liverpool coming East, or in New York going West, he was just on the verge of delirium tremens, because, being necessarily idle during the voyage, he did little else but drink and smoke. I never knew a man who could take so much liquor and show such small results. The fact was, that in the morning Plodkins was never at his best because he was nearer sober then than at any other part of the day; but, after dinner, a more entertaining, genial, generous, kind-hearted man than Hiram Plodkins could not be found anywhere.

I want to speak of Plodkins’ story with the calm, dispassionate manner of a judge, rather than with the partisanship of a favorable witness; and although my allusion to Plodkins’ habits of intoxication may seem to him defamatory in character, and unnecessary, yet I mention them only to show that something terrible must have occurred in the bath-room to make him stop short. The extraordinary thing is, from that day to this Plodkins has not touched a drop of intoxicating liquor, which fact in itself strikes me as more wonderful than the story he tells.

Plodkins was a frequent crosser on the Atlantic steamers. He was connected with commercial houses on both sides of the ocean; selling in America for an English house, and buying in England for an American establishment. I presume it was his experience in selling goods that led to his terrible habits of drinking. I understood from him that out West, if you are selling goods you have to do a great deal of treating, and every time you treat another man to a glass of wine, or a whiskey cocktail, you have, of course, to drink with him. But this has nothing to do with Plodkins’ story.

On an Atlantic liner, when there is a large list of passengers, especially of English passengers, it is difficult to get a convenient hour in the morning at which to take a bath. This being the case, the purser usually takes down the names of applicants and assigns each a particular hour. Your hour maybe, say seven o’clock in the morning. The next man comes on at half-past seven, and the third man at eight, and so on. The bedroom steward raps at your door when the proper time arrives, and informs you that the bath is ready. You wrap a dressing-gown or a cloak around you, and go along the silent corridors to the bath-room, coming back, generally before your half hour is up, like a giant refreshed.

Plodkins’ bath hour was seven o’clock in the morning. Mine was half-past seven. On the particular morning in question, the steward did not call me, and I thought he had forgotten, so I passed along the dark corridor and tried the bathroom door. I found it unbolted, and as everything was quiet inside, I entered. I thought nobody was there, so I shoved the bolt in the door, and went over to see if the water had been turned on. The light was a little dim even at that time of the morning, and I must say I was horror-stricken to see, lying in the bottom of the bath-tub, with his eyes fixed on the ceiling, Plodkins. I am quite willing to admit that I was never so startled in my life. I thought at first Plodkins was dead, notwithstanding his open eyes staring at the ceiling; but he murmured, in a sort of husky far-away whisper, “Thank God,” and then closed his eyes.

There was a feeble negative motion of the head. Then he said, in a whisper, “Is the door bolted?”

After another moment’s pause, I said

“Shall I ring, and get you some whiskey or brandy?”

Again he shook his head.

He was very much shaken, and I had some trouble in getting him on his feet, and seating him on the one chair in the room.

“You had better come to my state-room,” I said; “it is nearer than yours. What has happened to you?” He replied, “I will go in a moment. Wait a minute.” And I waited.

“Now,” he continued, when he had apparently pulled himself together a bit, “just turn on the electric light, will you?”

I reached up to the peg of the electric light and turned it on. A shudder passed over Plodkins’ frame, but he said nothing. He seemed puzzled, and once more I asked him to let me take him to my stateroom, but he shook his head.

“Turn out the electric light.” I did that also.

“Now,” he added, “put your hand in the water and turn on the electric light.”

I was convinced Plodkins had become insane, but I recollected I was there alone with him, shaky as he was, in a room with a bolted door, so I put my fingers in the water and attempted to turn on the electric light. I got a shock that was very much greater than that which I received when I saw Plodkins lying at the bottom of the bath-tub. I gave a yell and a groan and staggered backward. Then Plodkins laughed a feeble laugh.

The laugh seemed to have braced up Plodkins like a glass of liquor would have done, and when we got to my state-room he was able to tell me what had happened. As a sort of preface to his remarks, I would like to say a word or two about that bath-tub. It was similar to bath-tubs onboard other steamers; a great and very deep receptacle of solid marble. There were different nickel-plated taps for letting in hot or cold water or freshwater or saltwater as was desired; and the escape-pipe instead of being at the end, as it is in most bath-tubs, was in the center. It was the custom of the bath-room steward to fill it about half full of water at whatever temperature you desired. Then, placing a couple of towels on the rack, he would go and call the man whose hour it was to bathe.

Plodkins said, “When I went in there everything appeared as usual, except that the morning was very dark. I stood in the bath-tub, the water coming nearly to my knees, and reached up to turn on the electric light. The moment I touched the brass key I received a shock that simply paralyzed me. I think liquor has something to do with the awful effect the electricity had upon me, because I had taken too much the night before, and was feeling very shaky indeed; but the result was that I simply fell full length in the bath-tub just as you found me. I was unable to move anything except my fingers and toes. I did not appear to be hurt in the least, and my senses, instead of being dulled by the shock, seemed to be preternaturally sharp, and I realized in a moment that if this inability to move remained with me for five minutes I was a dead man dead, not from the shock, but by drowning. I gazed up through that clear green water, and I could see the ripples on the surface slowly subsiding after my plunge into the tub. It reminded me of looking into an aquarium. You know how you see up through the water to the surface with the bubbles rising to the top. I knew that nobody would come in for at least half an hour, and even then I couldn’t remember whether I had bolted the door or not. Sometimes I bolt it, and sometimes I don’t. I didn’t this morning, as it happens. All the time I felt that strength was slowly returning to me, for I continually worked my fingers and toes, and now feeling seemed to be coming up to my wrists and arms. Then I remembered that the vent was in the middle of the bath-tub; so, wriggling my fingers around, I got hold of the ring, and pulled up the plug. In the dense silence that was around me, I could not tell whether the water was running out or not; but gazing up towards the ceiling I thought I saw the surface gradually sinking down and down and down.”

“Of course it couldn’t have been more than a few seconds, but it seemed to be years and years and years. I knew that if once I let my breath go I would be drowned, merely by the spasmodic action of my lungs trying to recover air. I felt as if I should burst. It was a match against time, with life or death as the stake.”

“At first, as I said, my senses were abnormally sharp, but, by and by, I began to notice that they were wavering. I thought the glassy surface of the water, which I could see above me, was, in reality, a great sheet of crystal that somebody was pressing down upon me, and I began to think that the moment it reached my face I would smother. I tried to struggle but was held with a grip of steel. Finally, this slab of crystal came down to my nose and seemed to split apart. I could hold on no longer, and with a mighty expiration blew the water up towards the ceiling, and drew in a frightful smothering breath of saltwater, that I blew in turn upwards, and the next breath I took in had some air with the water. I felt the water tickling the corners of my mouth, and receding slower and slower down my face and neck. Then I think I must have become insensible until just before you entered the room. Of course, there is something wrong with the electric fittings, and there is a leak of electricity, but I think liquor is at the bottom of all this. I don’t believe it would have affected me like this if I had not been soaked in whiskey.”

“I intend to,” he answered solemnly, “and baths too.”