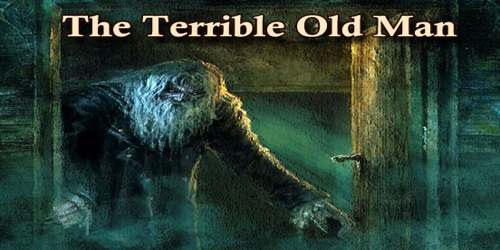 It was the design of Angelo Ricci and Joe Czanek and Manuel Silva to call on the Terrible Old Man. This old man dwells all alone in a very ancient house on Water Street near the sea and is reputed to be both exceedingly rich and exceedingly feeble; which forms a situation very attractive to men of the profession of Messrs. Ricci, Czanek, and Silva, for that profession was nothing less dignified than robbery.

The inhabitants of Kingsport say and think many things about the Terrible Old Man which generally keep him safe from the attention of gentlemen like Mr. Ricci and his colleagues, despite the almost certain fact that he hides a fortune of indefinite magnitude somewhere about his musty and venerable abode. He is, in truth, a very strange person, believed to have been a captain of East India clipper ships in his day; so old that no one can remember when he was young and so taciturn that few know his real name.

Among the gnarled trees in the front yard of his aged and neglected place, he maintains a strange collection of large stones, oddly grouped and painted so that they resemble the idols in some obscure Eastern temple. This collection frightens away most of the small boys who love to taunt the Terrible Old Man about his long white hair and beard or to break the small-paned windows of his dwelling with wicked missiles, but there are other things which frighten the older and more curious folk who sometimes steal up to the house to peer in through the dusty panes.

This folk says that on a table in a bare room on the ground floor are many peculiar bottles, in each a small piece of lead suspended pendulum-wise from a string. And they say that the Terrible Old Man talks to these bottles, addressing them by such names as Jack, Scar-Face, Long Tom, Spanish Joe, Peters, and Mate Ellis and that whenever he speaks to a bottle the little lead pendulum within makes certain definite vibrations as if in answer.

Those who have watched the tall, lean, Terrible Old Man in these peculiar conversations, do not watch him again. But Angelo Ricci and Joe Czanek and Manuel Silva were not of Kingsport blood; they were of that new and heterogeneous alien stock which lies outside the charmed circle of New England life and traditions, and they saw in the Terrible Old Man merely a tottering, almost helpless grey-beard, who could not walk without the aid of his knotted cane, and whose thin, weak hands shook pitifully. They were really quite sorry in their way for the lonely, unpopular old fellow, whom everybody shunned, and at whom all the dogs barked singularly. But business is business, and to a robber whose soul is in his profession, there is a lure and a challenge about a very old and very feeble man who has no account at the bank, and who pays for his few necessities at the village store with Spanish gold and silver minted two centuries ago.

Messrs. Ricci, Czanek, and Silva selected the night of April 11th for their call. Mr. Ricci and Mr. Silva were to interview the poor old gentleman, whilst Mr. Czanek waited for them and their presumable metallic burden with a covered motor-car in Ship Street, by the gate in the tall rear wall of their host’s grounds. Desire to avoid needless explanations in case of unexpected police intrusions prompted these plans for a quiet and unostentatious departure.

As prearranged, the three adventurers started out separately in order to prevent any evil-minded suspicions afterward. Messrs. Ricci and Silva met in Water Street by the old man’s front gate, and although they did not like the way the moon shone down upon the painted stones through the budding branches of the gnarled trees, they had more important things to think about than mere idle superstition. They feared it might be unpleasant work making the Terrible Old Man loquacious concerning his hoarded gold and silver, for aged sea-captains are notably stubborn and perverse. Still, he was very old and very feeble, and there were two visitors. Messrs. Ricci and Silva were experienced in the art of making unwilling persons voluble, and the screams of a weak and exceptionally venerable man can be easily muffled.

So they moved up to the one lighted window and heard the Terrible Old Man talking childishly to his bottles with pendulums. Then they donned masks and knocked politely at the weather-stained oaken door.

Waiting seemed very long to Mr. Czanek as he fidgeted restlessly in the covered motor-car by the Terrible Old Man’s back gate in Ship Street. He was more than ordinarily tender-hearted, and he did not like the hideous screams he had heard in the ancient house just after the hour appointed for the deed. Had he not told his colleagues to be as gentle as possible with the pathetic old sea-captain? Very nervously he watched that narrow oaken gate in the high and ivy-clad stone wall.

Frequently he consulted his watch and wondered at the delay. Had the old man died before revealing where his treasure was hidden, and had a thorough search become necessary? Mr. Czanek did not like to wait so long in the dark in such a place. Then he sensed a soft tread or tapping on the walk inside the gate, heard a gentle fumbling at the rusty latch, and saw the narrow, heavy door swing inward.

And in the pallid glow of the single dim street-lamp, he strained his eyes to see what his colleagues had brought out of that sinister house which loomed so close behind. But when he looked, he did not see what he had expected; for his colleagues were not there at all, but only the Terrible Old Man leaning quietly on his knotted cane and smiling hideously. Mr. Czanek had never before noticed the color of that mans eyes; now he saw that they were yellow.

Little things make considerable excitement in little towns, which is the reason that Kingsport people talked all that spring and summer about the three unidentifiable bodies, horribly slashed as with many cutlasses, and horribly mangled as by the tread of many cruel boot-heels, which the tide washed in. And some people even spoke of things as trivial as the deserted motor-car found in Ship Street, or certain especially inhuman cries, probably of a stray animal or migratory bird, heard in the night by wakeful citizens.

But in this idle village gossip, the Terrible Old Man took no interest at all. He was by nature reserved, and when one is aged and feeble, one’s reserve is doubly strong. Besides, so ancient a sea-captain must have witnessed scores of things much more stirring in the far-off days of his unremembered youth.