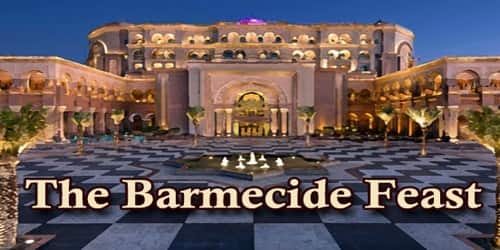 There was once a rich old man who was called the Barmecide. He lived in a beautiful palace in the midst of flowery gardens. He had everything that heart could wish.

In the same land, there was a poor man whose name was Schacabac. His clothing was ragged, and his food was the scraps which other people had thrown away. But he had a light heart and was as happy as a king.

Once when Schacabac had not had anything to eat for a long time, he thought that he would go and ask the Barmecide to help him.

The servant at the door said, “Come in and talk with our master. He will not send you away hungry.”

Schacabac went in, and passed through many beautiful rooms, looking for the Barmecide. At last, he came to a grand hall where there were soft carpets on the floor, and fine pictures on the walls and pleasant couches to lie down upon.

At the upper end of the room, he saw a nobleman with a long white beard. It was the Barmecide; and poor Schacabac bowed low before him, as was the custom in that country.

The Barmecide spoke very kindly and asked what was wanted.

Schacabac told him about all his troubles and said that it was now two days since he had tasted the bread.

“Is it possible?” said the Barmecide. “You must be almost dead with hunger, and here I have plenty and to spare!”

Then he turned and called, “Ho, boy! Bring in the water to wash our hands, and then order the cook to hurry the supper.”

Schacabac had not expected to be treated so kindly. He began to thank the rich man.

“Say not a word,” said the Barmecide, “but let us get ready for the feast.”

Then the rich man began to rub his hands as though someone was pouring water on them. “Come and wash with me,” he said.

Schacabac saw no boy, nor basin, nor water. But he thought that he ought to do as he was bidden; and so, like the Barmecide, he made a pretense of washing.

“Come now,” said the Barmecide, “let us have supper.”

He sat down, as if to a table, and pretended to be carving a roast. Then he said, “Help yourself, my good friend. You said you were hungry: so, now, don’t be afraid of the food.”

Schacabac thought that he understood the joke, and he made a pretense of taking food and passing it to his mouth. Then he began to chew, and said, “You see, sir, I lose no time.”

“Boy,” said the old man, “bring on the roast goose. Now, my good friend, try this choice piece from the breast. And here are a sweet sauce, honey, raisins, green peas, and dry figs. Help yourself, and remember that other good things are coming.”

Schacabac was almost dead with hunger, but he was too polite not to do as he was bidden.

“Come,” said the Barmecide, “have another piece of the roast lamb. Did you ever eat anything so delicious?”

“Never in my life,” said Schacabac. “Your table is full of good things.”

“Then eat heartily,” said the Barmecide. “You cannot please me better.”

After this came the dessert. The Barmecide spoke of sweet-meats and fruits, and Schacabac made believe that he was eating them.

“Now is there anything else that you would like?” asked the host.

“Ah, no!” said poor Schacabac.” “I have indeed had great plenty.”

“Let us drink, then,” said the Barmecide. “Boy, bring on the wine!”

“Excuse me, my lord,” said Schacabac, “I will drink no wine, for it is forbidden.”

The Barmecide seized him by the hand. “I have long wished to find a man like you,” he said. “But come, now we will sup in earnest.”

He clapped his hands. Servants came, and he ordered supper. Soon they sat down to a table loaded with the very dishes of which they had pretended to eat.

Poor Schacabac had never had so good a meal in all his life. When they had finished, and the table had been cleared away, the Barmecide said,

“I have found you to be a man of good understanding. Your wits are quick, and you are ready always to make the best of everything. Come and live with me, and manage my house.”

And so Schacabac lived with the Barmecide many years, and never again knew what it was to be hungry.