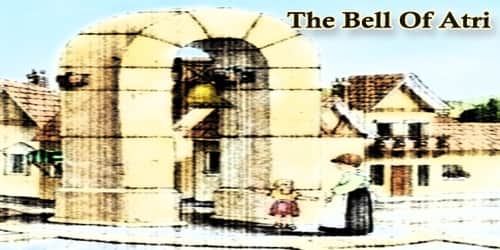 The Bell Of Atri

Atri is the name of a little town in Italy. It is a very old town and is built half-way up the side of a steep hill.

A long time ago, the King of Atri bought a fine large bell and had it hung up in a tower in the market place. A long rope that reached almost to the ground was fastened to the bell. The smallest child could ring the bell by pulling upon this rope.

“It is the bell of justice,” said the king.

When at last everything was ready, the people of Atri had a great holiday. All the men and women and children came down to the market place to look at the bell of justice. It was a very pretty bell, and was, polished until it looked almost as bright and yellow as the sun.

“How we should like to hear it ring!” they said.

Then the king came down the street.

“Perhaps he will ring it,” said the people; and everybody stood very still, and waited to see what he would do.

But he did not ring the bell. He did not even take the rope in his hands. When he came to the foot of the tower, he stopped and raised his hand.

“My people,” he said, “do you see this beautiful bell? It is your bell, but it must never be rung except in case of need. If anyone of you is wronged at any time, he may come and ring the bell; and then the judges shall come together at once, and hear his case, and give him justice. Rich and poor, old and young, all alike may come; but no one must touch the rope unless he knows that he has been wronged.”

Many years passed by after this. Many times did the bell in the market place ring out to call the judges together? Many wrongs were righted; many ill-doers were punished. At last the hempen rope was almost worn out. The lower part of it was un-twist-ed; some of the strands were broken; it became so short that only a tall man could reach it.

“This will never do,” said the judges one day. “What if a child should be wronged? It could not ring the bell to let us know it.”

They gave orders that a new rope should be put upon the bell at once, a rope that should hang down to the ground so that the smallest child could reach it. But there was not a rope to be found in all Atri. They would have to send across the mountains for one, and it would be many days before it could be brought. What if some great wrong should be done before it came? How could the judges know about it, if the injured one could not reach the old rope?

He ran into his garden, which was not far away, and soon came back with a long grape-vine in his hands.

“This will do for a rope,” he said; and he climbed up, and fastened it to the bell. The slender vine, with its leaves and tendrils still upon it, trailed to the ground.

Now, on the hillside above the village, there lived a man who had once been a brave knight. In his youth, he had ridden through many lands, and he had fought in many a battle. His best friend through all that time had been his horse, a strong, noble steed that had borne him safe through many a danger.

But the knight, when he grew older, cared no more to ride into battle; he cared no more to do brave deeds; he thought of nothing but gold; he became a miser. At last, he sold all that he had, except his horse, and went to live in a little hut on the hill-side. Day after day he sat among his money bags, and planned how he might get more gold; and day after day his horse stood in his bare stall, half-starved, and shivering with cold.

“What is the use of keeping that lazy steed?” said the miser to himself one morning. “Every week it costs me more to keep him than he is worth. I might sell him, but there is not a man that wants him. I cannot even give him away. I will turn him out to shift for himself, and pick grass by the roadside. If he starves to death, so much the better.”

So the brave old horse was turned out to find what he could among the rocks on the barren hill-side. Lame and sick, he strolled along the dusty roads, glad to find a blade of grass or a thistle. The boys threw stones at him, the dogs barked at him, and in the entire world, there was no one to pity him.

One hot afternoon, when no one was upon the street, the horse chanced to wander into the market place. Neither a man nor child was there, for the heat of the sun had driven them all indoors. The gates were wide open; the poor beast could roam where he pleased. He saw the grape-vine rope that hung from the bell of justice. The leaves and tendrils upon it were still fresh and green, for it had not been there long. What a fine dinner they would be for a starving horse!

He stretched his thin neck and took one of the tempting morsels in his mouth. It was hard to break it from the vine. He pulled at it, and the great bell above him began to ring. All the people in Atri heard it. It seemed to say,

“Someone has done me wrong!

Someone has done me wrong!

Oh! Come and judge my case!

Oh! Come and judge my case!

The judges heard it. They put on their robes and went out through the hot streets to the market place. They wondered who it could be who would ring the bell at such a time. When they passed through the gate, they saw the old horse nibbling at the vine.

“Ha!” cried one, “it is the miser’s steed. He has come to call for justice; for his master, as everybody knows, has treated him most shamefully.”

“He pleads his cause, as well as any dumb brute, can,” said another.

“And he shall have justice!” said the third.

Meanwhile, a crowd of men and women and children had come into the market place, eager to learn what caused the judges were about to try. When they saw the horse, all stood still in wonder. Then everyone was ready to tell how they had seen him wandering on the hills, unfed, uncared for, while his master sat at home counting his bags of gold.

“Go bring the miser before us,” said the judges.

And when he came, they bade him stand and hear their judgment.

“This horse has served you well for many a year,” they said. “He has saved you from many a peril. He has helped you gain your wealth. Therefore we order that one half of all your gold shall be set aside to buy him shelter and food, a green pasture where he may graze, and a warm stall to comfort him in his old age.”

The miser hung his head and grieved to lose his gold, but the people shouted with joy, and the horse has led away to his new stall and dinner such as he had not had in many a day.