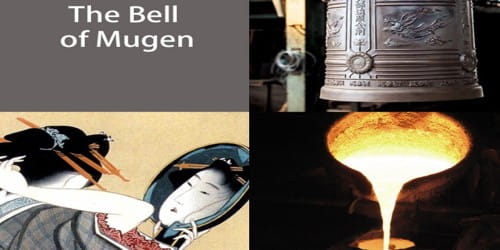 The Bell of Mugen

The Bell of Mugen (A Legend From Japan)

Long ago, the people of the village of Mugen in Japan built a temple. When the time came to make the bell, the people offered gifts of metal. They intended to melt the metal and create a magnificent bell, larger and more melodious than any other.

The people came to lay their offerings before the temple. Many people brought mirrors made of silver and gold and glass, and among them stood one young woman. She held her mirror in her arms, awaiting her turn to give her a gift.

As she waited she began to tremble. She looked at the mirror she held and thought of her mother and her grandmother, for the mirror had belonged to each of them before her. The beautiful mirror was sacred to the family; the maker had engraved a bamboo, a plum and a pine on its back, for these were lucky symbols.

The woman tenderly touched each emblem.

Around her people laughed and chatted with each other, for they felt pleasure at the opportunity to give something of their own to the temple. But the woman didn’t laugh or speak. She stared at her mirror and whispered to herself, “This mirror is mine. It is all mine.”

When she reached the front of the line, she handed her mirror to the priest, but the moment she had passed it to him, she was filled with regret. She walked home slowly, looking at the ground. When her neighbors waved hello, she did not respond, for she could think only of all she had lost.

“My mother told me the mirror is the soul of woman,” she wept, “and so I have given away my soul. I am lost.” At home, she paced and repeated, “I have betrayed my soul.”

Days passed, but she could think of nothing else. She wished with all her heart she could retrieve her mirror. At last, she decided she must, somehow, but the day for melting the metal had come.

All the people gathered at the temple where they built a huge fire. One by one, they tossed their mirrors and other treasures into the fire, and as each object began to melt, the people cheered.

But suddenly everyone gasped, for the mirror with the pine, the plum and the bamboo lay in the flame but would not melt. All the others melted to pure, flowing metal, but the woman’s mirror lay intact among the ashes.

When the woman saw her mirror was whole, she ran joyfully toward the fire, ready to rescue it. As she reached out to take it, a dozen people surrounded her, and when she looked into their faces, she saw that they were angry and disappointed with her.

One of the neighbors stepped forward, gently touched the woman’s hands and said, “We heard you weeping, and so we knew you not only gave your gift halfheartedly but regretted giving it. You have cared only for yourself all these years, but give your mirror again with all your heart and it will melt.”

The men rekindled the fire, and the woman reluctantly placed her mirror into its center. Still, the mirror would not melt, and when the woman placed her hand to her heart, she could feel the cold. The people turned away from her.

The woman could never find it in her heart to give away her mirror, but keeping it never brought her pleasure, either. As the years passed, she grew bitter and angry. She spent her days looking into her mirror; after a while, she spoke to no one at all.

Many years passed, and one day the woman died, leaving a note behind. “The bell of Mugen contains great wealth,” her note read. “Whoever breaks the bell will become rich beyond measure.”

Many greedy people flocked to the temple, hoping they might break the bell. For the first time, the bell rang not to call people to gather. Now people rang and rang and rang the bell, hoping it might crack.

Throughout the countryside, the bell clanged day and night. At last, the priests could bear the sound no longer. “The ringing bell is the sound of greed,” they said.

They removed the bell from the temple and rolled it down the hill at the temple’s foot. The bell rolled into a swamp, and there, they say, it lies still, a symbol of the woman’s curse — the curse of greed and selfishness.