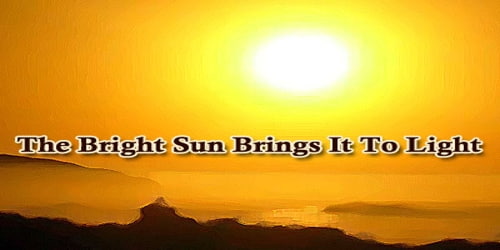 The Bright Sun Brings It To Light

A tailor’s apprentice was traveling about the world in search of work, and at one time he could find none, and his poverty was so great that he had not a farthing to live on. Presently he met a Jew on the road, and as he thought he would have a great deal of money about him, the tailor thrust God out of his heart, fell on the Jew, and said, ‘give me your money, or I will strike you dead.’ Then said the Jew, grant me my life, I have no money but eight farthings.’ But the tailor said, ‘money you have, and it shall be produced, and used violence and beat him until he was near death. And when the Jew was dying, the last words he said were, the bright sun will bring it to light, and thereupon he died. The tailor’s apprentice felt in his pockets and sought for money, but he found nothing but eight farthings, as the Jew had said. Then he took him up and carried him behind a clump of trees, and went onwards to seek work.
After he had traveled about a long while, he found work in a town with a master who had a pretty daughter, with whom he fell in love, and he married her and lived in good and happy wedlock.

After a long time when he and his wife had two children, the wife’s father and mother died, and the young people kept house alone.

One morning, when the husband was sitting on the table before the window, his wife brought him his coffee, and when he had poured it out into the saucer and was just going to drink, the sun shone on it and the reflection gleamed hither and thither on the wall above and made circles on it. Then the tailor looked up and said, yes, it would like very much to bring it to light, and cannot. The woman said, o, dear husband, and what is that, then. What do you mean by that?

He answered I must not tell you. But she said, if you love me, you must tell me, and used her most affectionate words, and said that no one should ever know it, and left him no rest. Then he told her how years ago, when he was traveling about seeking work and quite worn out and penniless, he had killed a Jew, and that in the last agonies of death, the Jew had spoken the words, the bright sun will bring it to light.
And now, the sun had just wanted to bring it to light, and had gleamed and made circles on the wall, but had not been able to do it. After this, he again charged her particularly never to tell this, or he would lose his life, and she did promise.

However, when he had sat down to work again, she went to her great friend and confided the story to her, and asked her never to repeat it to any human being, but before three days were over, the whole town knew it, and the tailor was brought to trial and condemned. And thus, after all, the bright sun did bring it to light.