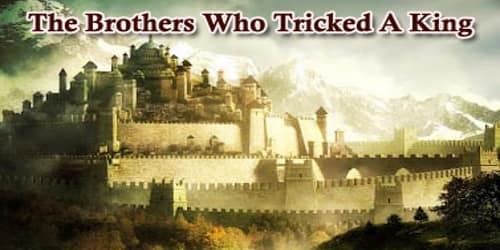 The Brothers Who Tricked A King

Once upon a time, there lived a farmer who was poor in material wealth but rich in love, for he had six devoted sons. The boys looked exactly alike, but each of them was possessed of an extraordinary and unique gift.

The eldest son was the cleverest young man in the land; he could outsmart anyone. The second son could stretch his arms so far he could reach the ends of the world. The third son’s head was hard as steel, and the fourth son’s skin was tough as iron. The fifth son could not reach the ends of the world, and he wasn’t particularly clever, and his head was soft his skin mere flesh, but he could withstand bone-chilling cold. And then there was the sixth son, who looked normal most of the time, but when he wanted to, he could stretch his legs for miles and miles.

As the boys grew, they learned to appreciate their gifts. The eldest son promised his father that one day he would reap the benefits of his sons’ wondrous skills.

Years passed, and one day the farmer came down with a mysterious illness that none of the doctors could cure. Near-death, the farmer called his clever son to his side. “I’m afraid I am dying, son,” he said.

“I know how to cure you,” said the eldest son. And then he called his second brother to the room. “Stretch your arms and steal the giant pearl from the king’s palace,” he said.

That’s precisely what the second son did, for he trusted that his clever brother’s ideas always were the best ideas.

When he had the pearl, the eldest son called his brothers to the room. “We will boil this pearl, and when our father drinks the boiled water, he will be well again.” They crowded around and watched the water boil for hours, and afterward, they poured the water into a glass.

When the farmer drank the glass of water, he was instantly well again, perfectly healthy and strong.

There was just one problem. Before the second son had time to replace the pearl, the king discovered it missing. He sent his soldiers to find the thief.

“We saw a pair of arms stretching across the land,” the villagers told the soldiers, and before long they learned that only one young man in the land had arms that could stretch that far. They burst into the farmer’s house and when they saw the eldest son, believing him to be the thief; they chained him and marched him to the palace.

“Chop off his head!” the king demanded. The soldiers moved forward to seize the prisoner, but the eldest son cried out, “Just one wish before I die. Please let me see my father one last time. I want to tell him how his son is to die.”

The king was not a terribly cruel man, and so he granted the wish, adding, “But you must come back tomorrow.”

The next day, in his place, the third son went to the palace, and no one was the wiser because the boys looked exactly alike. When the ax fell on the young man’s head, nothing happened. “Your head is hard as steel,” the king said, puzzled. “Guards thrust a sword through him.”

“That is fine,” said the third son, “but let me first go to see my poor father to tell him the news. He deserves to know the truth about how his son will die.”

“Go then, but return tomorrow,” said the king, and the next day the fourth son arrived in his brother’s stead. When the soldiers tried to thrust the sword through his skin that was like iron, the sword crumpled. The guards were mystified.

“Throw him into the icebox,” the king said, “and let him freeze!” And again the son pleaded to allow him to go home to his father, and once more the king was generous enough to let him go. “You’ll be back tomorrow at dawn.”

When the next day the fifth son appeared at the palace, the guards threw him into the icebox, but the next morning when they opened the door, the young man was sleeping peacefully, for he had not felt a bit of the cold.

The king was distraught. “We must throw you into the sea and drown you then!” he said, and again the young man pleaded for mercy. “I must tell my father.”

“Go,” said the king, “one more day with your father is nothing to me.”

Of course, the sixth son appeared the next day, and when the soldiers tossed him into the sea, he disappeared under the waves. The guards turned their backs, but only moments later they were astonished to see the young man’s head rising above the waves. He had stretched his legs to reach the floor of the sea, and he brought up with him dozens of beautiful shells and dazzling pearls.

The king called the young man to his chambers. When he saw the pearls, he said, “I don’t know how you’ve done this, but I’ll set you free in exchange for those pearls.”

So the sixth son returned home, where the family gathered in celebration.

They lived happily ever after, too, for the sixth son, under the guidance of his eldest brother, had saved a few of the sea’s treasures for his beloved family.