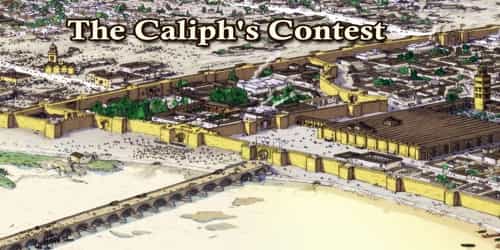 Long ago in Baghdad, there lived a caliph who was known as the happy caliph, for he had the good fortune to rule over a prosperous land. Merchants traveled from far and wide to the caliph’s kingdom; when they visited Baghdad, they often stopped by the palace to tell the caliph tales of the world glorious tales, fabulous tales, some tales the caliph almost could not believe.

When one merchant told him of an island where the horses were as small as dogs, the caliph shook his head and said, “That cannot be.”

“Oh, but it is true,” the merchant answered.

“Impossible,” the caliph said to the merchant who spoke of sea monsters who swallowed ships. “But I have seen it with my own eyes,” the merchant said.

The caliph shook his head in disbelief when another merchant told him tales of stars that flew and fairies who spun wheat into gold. “It is true,” the merchant assured the caliph.

Before long the caliph came to believe that nothing was impossible.

At last, he decided he must know if anything was impossible. He decided to hold a contest. He invited all his people to come to him and tell him a tale. If the tale-teller could make the caliph say, “That is impossible,” he would win 1,000 gold coins. He placed the jar of coins beside his throne.

Word of the caliph’s contest spread throughout the city. Every man, woman, and child rushed to the palace gates. One by one they stepped before the caliph, determined to make him say, “That is impossible.”

The first man stepped boldly up to the caliph. His face was flushed, his arms waving. “Protector of the People,” the man cried, “the moon has just crashed to the Earth. Hundreds of your cities have been destroyed!”

The caliph did not believe the moon had crashed to Earth, but he thought quietly for a while. At last, he nodded, for he knew that this was, indeed, possible. “That’s possible,” he said. The crowd laughed heartily, and the man stepped away.

A physician now approached the caliph. “Protector of the People,” said the doctor, “the truth must be known. One of your wives has just given birth to this pig,” and he reached under his long coat and took out a tiny, day-old pig.

The caliph looked closely at the pig, and though he did not believe the doctor was telling the truth, he nodded somberly. “Yes,” he said, “that is possible.”

Again the crowd laughed, and a third man stepped up to the throne. He was a well-known fortune teller, a man who read the stars and the moon and often predicted the future. “Protector of the People,” said the fortune-teller, “I have read the stars, and I see that you will soon grow a tail, and after that, you will sprout fur, and before long you will be a monkey.”

Now the caliph knew that people do change, and so he nodded. “That is possible,” he said.

The crowd roared with laughter, but soon a hush descended, for a lazy beggar whose name was Omar approached the throne. He carried on his back two enormous stone jars, and as he climbed the steps, he groaned from the weight of his load. When he reached the caliph’s throne, he put the jars in front of the caliph, bowed and said, “Protector of the People, you are the greatest ruler in the entire world.”

The caliph smiled, for he believed that this was true. Omar continued.

“Once you spent all of your money to defeat your enemies. My own father told me this story.”

Again the caliph smiled, for this too he knew to be true. But Omar was not finished.

“And when you had spent all of your money, you went to borrow money from others to save the country.”

The caliph knew this also was true, and he nodded. But just as he was about to say, “That is possible,” Omar raised his hand and continued his speech. “Protector of the People, from my father you borrowed these two stone jars. They contained 20,000 gold pieces, and you told my father that on this very day you would return his money to his son.”

When the caliph had stopped laughing, he looked kindly at Omar. “You are wiser than you seem, Omar. I knew your father. He too was a lazy beggar who never owned a single coin. I will have to say it is impossible that he loaned me 20,000 pieces of gold. And so, my friend, you win a thousand pieces of gold.”