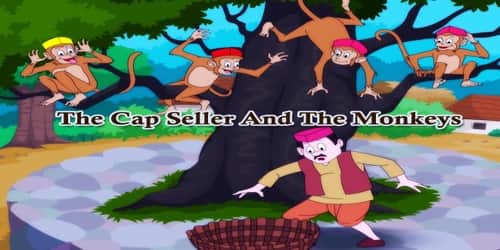 The Cap Seller And The Monkeys

Once upon a time, there was a cap-seller staying in a small village. Every day he was going to sell his caps in a village market. He was going through a forest. He was carrying a basket of red caps on his head. He got tired in the heat of the sun. He lay down under a tree to take rest. He put his basket on the ground. He fell asleep.

There were monkeys on that tree. They came down and took the caps. Then they climbed on the tree. When the cap-seller woke up, he was surprised to see that monkeys were wearing his caps. He became sad. He thought of a plan. He threw his own cap on the ground. The monkeys also threw down their caps. He collected his caps and went away.

Moral of the story: ‘Wit works where strength fails.’