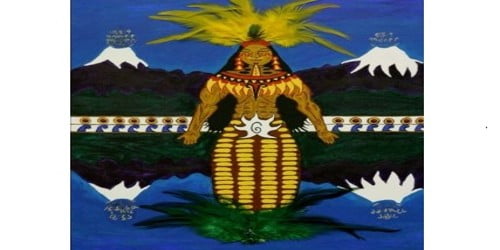 The Corn People (A Creation Myth From Central America)

Long, long ago the Life Givers began to make the world.

“Beautiful,” they said as they looked at the world they had made.

For a long, while they watched over their creation, admiring the mountains and valleys, the rivers and oceans, the animals and insects and birds.

But then they noticed that something seemed wrong with the world they had made.

“Something is missing,” the Life Givers said, and they thought for a while. At last, they decided the world needed human beings.

The Life Givers gathered to discuss the elements they would use to forge their new creation. “We have everything we need,” they said. “We can create a perfect creature from all of our ingredients, but we must choose carefully.”

At last, they all agreed. “Clay and water,” they said. “Our clay is strong, and if we mix it with water we can mold a fine creature.”

They mixed the clay with water and shaped their human beings. When they were finished, they sighed happily, pleased with what they had made.

Just as the Life Givers began to celebrate, the sky turned dark and the winds began to shriek. The clouds clustered together and dropped their rains on the earth.

The human beings made of clay were abundant, but as the rain fell in torrents, the new creatures began to wash away.

“This will not do,” the Life Givers said. “We are losing our new creation,” and they felt deep sorrow as they watched their men and women melting and returning to the earth in the form of red clay.

“We will have to choose some other elements to mix to make our human beings,” the Life Givers said, and so once more they looked around at all the elements that made up their world.

“We could use sand or dust,” another said.

“No, no,” others said, shaking their heads. “Sand and stone and dust will never do.”

At that moment they gazed at their lovely trees, and altogether the Life Givers nodded. “We will use the bark of our trees to make a man. He will be sturdy, the heartiest of creatures.”

“And from the core of the tree we will make woman,” they added, “and she also will be strong.”

When they were finished, they were pleased with their work. Each being was tall and straight and smelled as rich as the wonderful woods from which they were made.

Alas, after a while they saw their human beings were not perfect. They were too hard and unyielding. They would not bend or sway or dance. Sometimes, when the wind blew hard, human beings would crash straight to the earth.

“This will not work,” the Life Givers agreed. “We must find something else to make our people.”

The days passed, and then months went by as the Life Givers looked over their world, wondering what ingredient might make the most remarkable of human beings.

They watched the flowers bloom, the bushes grow, the waves crashing upon the shore. They watched the birds and the beasts and pondered what ingredient it was that would make the best of human beings.

One day as they gazed at their fields, they knew just what to use to make their human beings. They gathered in a vast field of corn, and one by one they plucked the ears. “Yes,” they all agreed, “we will create our human beings from these.”

They plucked the white corn and the yellow corn, and they began to shape their men and women from the meal they made by grinding the kernels.

When the Life Givers had finished, they were delighted, for their new creation was as wondrous as their corn. They were ripe and sweet, hearty and nourishing, beautiful and abundant. And so the human beings lived on in this world, and it is they who are the ancestors of the people of Guatemala.