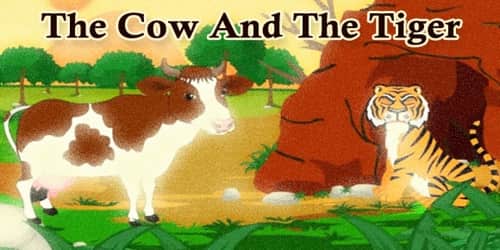 The Cow And The Tiger

Long-time ago, there lived four cows in a jungle. They were best friends. They always grazed together and saved each other in danger. Due to this unity, even the tigers and lions could not kill and eat them. A lion had indeed an eye upon these cows. But he could never find the right opportunity to make them his prey.

One day, the cows had a fight among themselves. Each one grazed separately her own way. The lion and the tiger got to know about the fight of the cows. So, they planned to trick all the cows.

One day, lion and the tiger found the right opportunity to attack them. So, they hid themselves behind the bushes and waited for the lonely cow. When a lonely cow came closer to the bushes, they pounced upon her and kill her for his meals. In this way, all the four cows were killed one by one by them.

Moral of the story: ‘Unity is strength.’