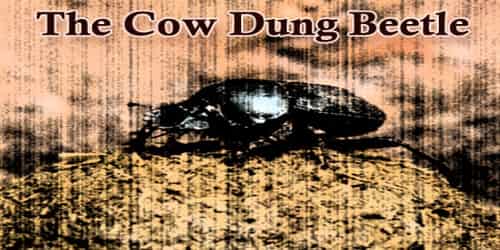 In a field far away lived a dung beetle. All-day it remained immersed in cow dung, lazing around. His favorite pastime was to make balls of cow dung and play with them. “Surely, this is heaven,” he would think to himself every day.

One day, as he lay there, as usual, a bee came buzzing around. “Hello there, Mr. Beetle!” The beetle responded excitedly and said, “Look, we are both insects! We could be best friends!”

The bee was not happy with that suggestion. “We cannot be friends! You lie in that foul-smelling dung all day! And I live in the king’s garden!” continued the bee, “I am surrounded by lovely fragrances and enchanting flowers! How can you ever be equal?” The dung beetle pleaded with him. “Is it not the duty of great personalities like you to think and act for the poor ones like me? Where would we helpless souls be without your help?”

The bee was moved by this argument. “You are right, beetle comes with me, and I’ll show you wonderful things!” The beetle climbed onto the bee’s back and flew to the king’s garden.

The two became friends and flew over the pretty garden. The beetle was enchanted by the sights he saw. “It’s the most beautiful garden I have ever seen!” After a while, the bee got tried and flew to the pond. He set the beetle down on a lotus. “Rest here awhile, my friend and I’ll be back soon,” he said, flying away.

The beetle soon fell asleep, lulled by the fragrant lotus petals. But, the bee did not return on time, and soon night fell. The petals of the lotus closed around the beetle while he slept, trapping him.

The next morning before the petals of the flower could open; a priest came to the pond and plucked the lotus.

He carried the lotus to the temple and placed it on an idol of God. The beetle was still locked within the lotus. The flower remained on the idol the whole day. The next day, the priest removed the flower and threw it into the holy Ganges River.

The lotus floated in the river for a while, and when the sun’s rays touched it, it finally opened its petals. And there was the dung beetle, safe and sound!

When he looked around, he saw his friend, bee, buzzing nearby. The bee was overjoyed to see the dung beetle. “I’ve been looking for you for three days! Where have you been?”

Replied the beetle, “Thanks to you, I’ve had the most marvelous time! First, I was enjoying life on the lotus I rested on. It felt like heaven! And then, I was offered to God along with the lotus. And finally, I had the good fortune to bathe in the holy Gaga! It is true, my friend, blessed are we lowly mortals when we have great friends like you!”