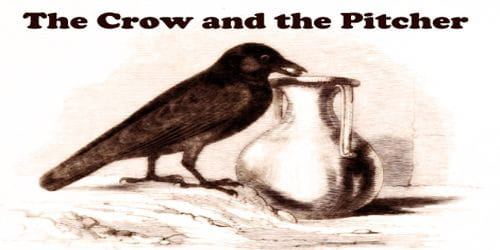 The Crow and The Pitcher

It was a summer day and a crow became very thirsty. He searched for water here and there but found no water anywhere. Getting tired, the crow sat on the branch of a tree in a garden. He came near it and found that there was a little water at the bottom of the pitcher. But it was so low that he could not reach it. So he tried to overturn the pitcher but the pitcher was very heavy.

Consequently, he failed to turn it upside down. The crow was very intelligent. He thought of a clever way of getting water. Fortunately, he saw some stones lying near the pitcher. Then he hit upon a plan. He picked up the stones and threw them into the pitcher one by one. Gradually the water rose and it came up to the mouth of the pitcher. At last, the crow was able to drink it to its heart’s content. Then he flew away.

Moral of the story: ‘Where there is a will, there is away.’