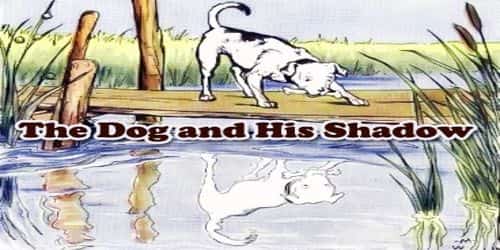 The Dog and His Shadow

Once a dog stole a piece of bone from the market. He was very happy. He was going along the side of a stream and came to the bridge. He wanted to cross the bridge. While going over the bridge, he saw that another dog was crossing the bridge with a piece of bone in its mouth. All on a sudden, a thought came across his mind. He said to himself, “If I snatch away that piece of bone, I shall have the two pieces of bone”. But he did not think for once about his shadow. His shadow reflected on the water. He saw the reflection of his own shadow is the translucent (clear) water of the stream.

He said to himself, “Alas! have lost my piece of bone. If I did not run after the dog, it would not happen. Now, nothing can be done”, having lost his own piece of bone, the dog went away disappointed.

Moral of the story: ‘It is very foolish to be greedy.’