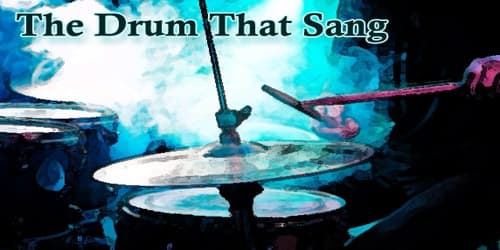 The Drum That Sang

Once upon a time, there was a king who had a child with the body of a normal baby, but the ears of an ox! The king always kept his baby’s ears covered and don’t allow anyone to see him. One day, when it was time to get the child tonsured, the king got worried. “The barber will surely notice my child’s ox-ears. If he spreads the news, people will make fun of my son!”

So, when the barber came to shave the child’s head, the king called him aside, and said, “You must never speak about what you are going to see!” The barber was puzzled, but he proceeded to shave the child’s head. Then he noticed the child’s ears and was absolutely stunned. The king again said, “You must never speak about what you saw!” Now the barber understood what the king meant and he cleverly pretended as if he hadn’t seen anything unusual. Before the barber left, the king warned him, “Keep it to you! Or I’ll have you hanged!” For a few days, the barber kept the secret to himself. But soon, because he found it difficult to digest this strange fact, his stomach began to swell and made him very uncomfortable.

One day, his friend, a drummer, saw him in the miserable condition. “Why is your stomach swollen, dear friend?” asked the drummer. “Because I shaved the king’s son, and he has the ears of an ox!” replied the barber. And even as he spoke, his stomach started returning to its normal size. “Ah, what a relief!” he sighed. “But please keep it to yourself, or else the king will have me executed,” he requested the drummer.

Now the drummer thought, “If I keep the secret to myself, my belly will swell up like the barbers. But if I tell anyone, the king will surely punish the barber.” So, he made a plan. He went out in the streets, breathing his drum and singing, “The son of the king has the ears of an ox!”

Soon, the song reached the king’s ears, and he stormed out of his palace, shouting, “How dare you sing that silly song! I will have you hanged, and that barber too, because of the secret out!”

At this, the drummer said, “I don’t sing, Your Majesty! It’s my drum that sings. I have no idea what it says. By the way, which barber are you talking about? And what secret has he let out?” The kin was in a fix. How could he answer these questions without admitting the truth! The king stomped away, angrily.