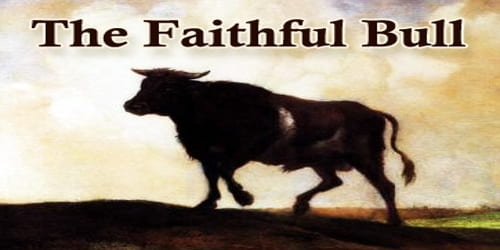 Once upon a time, a young boy lived with his poor parents at the edge of the kingdom. One day the boy’s father gave his son a newborn bull calf to keep as his own.

The boy adored his calf. He walked with him every day and always fed him the freshest grass. At night he sat in the bull’s pen and sang him to sleep.

In the midst of a terrible winter the following year, the boy’s father became ill and died. The boy was heartbroken.

Not long afterward, his mother remarried, and one day as the boy and his young bull were returning from the woods, the stepfather said angrily: “You waste too much time with that creature. Tomorrow I will kill your bull, and we will have plenty to eat for the rest of the winter.”

That night the boy stayed in the bull’s pen until his mother and stepfather were asleep. When the house was dark, he tied a rope around the bull’s neck and gently pulled him from the pen. “Come,” he said, “We must go away.”

The bull quietly followed, and the two walked into the forest.

When morning dawned, the boy unwrapped some bread and cheese. This he split in half. When he handed one half to the bull, the bull suddenly spoke.

“You have been kind to me always,” the bull said.

The boy was astonished. “When did you learn to speak?” he asked.

“I have always known how,” the bull answered, “but never before did I need to. Now I must tell you something. Listen carefully, and your life will be good. We must keep traveling, for if we stop, your stepfather will find us. He will kill me and punish you. But in the forest, we will meet many enemies. Let me fight them.”

“I can’t let you fight alone,” the boy said.

“You must,” the bull answered. “Promise you will follow my instructions.”

The boy now knew his bull was magic and that he must heed his advice. That night, when a pack of wolves appeared, the bull called, “Climb this tree,” and so the boy did.

The bull fought bravely as the boy watched from his perch in the tree, and to his amazement, before long the bull had killed every one of the wolves.

But when the boy began to shimmy down the tree, the bull looked up and said, “Wait. We’re not safe yet.” And a moment later a herd of wild boars attacked. Once again the bull fought bravely, and he fended off everyone.

Again the boy began to climb down, but this time the bull called quickly, “No. Stay where you are. A dragon is going to attack in a moment. He will kill me, but when he does, you must cut out my magic heart. When you meet the dragon, you must throw my heart at his head. And you must cut off his tongue.”

“But…” the boy began. Before he could say another word, the dragon bounded out of the woods and savagely attacked the bull. Just as the bull had predicted, the dragon killed the bull, and satisfied, he lumbered away.

The boy was as sad as he ever had been, but he did as his friend had instructed. He took the bull’s heart and kept it wrapped in his pack as he wandered on.

After a while, he heard the sound of weeping. There, tied to a tree, was a beautiful girl. He quickly ran to rescue her.

“No,” she cried. “Don’t untie me. I am to be sacrificed to the dragon who lives in this forest, and if he has no sacrifice, he will destroy the kingdom.”

Just at that moment, the smoke-breathing dragon charged toward the girl. The boy grabbed the bull’s heart and threw it at the dragon’s head, and the dragon was struck dead. And now, as the bull had instructed him, he cut off the dragon’s forked tongue.

“How can I thank you?” the girl cried. “Let me give you this ring.” She took a diamond ring from her finger and handed it to the boy.

Just then the king and all his men galloped into the woods. So delighted was the king to see his daughter safe and free for indeed, it was the princess who was to be sacrificed he called for a celebration. The boy, embarrassed by his tattered clothes, quietly slipped away.

When at last all had settled down, the girl told her father the story, and the king sent word into the kingdom. “The boy who carries the dragon’s tongue and my daughter’s ring will be richly rewarded. Tell whoever he is that he must come to the palace.”

Of course, every young man in the kingdom who heard the announcement appeared at the palace gates. Each one carried what appeared to be an animal’s tongue, and each brought a diamond ring. But the princess shook her head at the sight of each one. “I will know him when I see him,” she said.

By this time the boy was far, far away. One day as he sat outside an inn, the king’s messengers rode past shouting out the news. “The king wishes to find the boy who saved the princess. He is the boy who holds the dragon’s tongue.”

The boy shyly approached the messengers and told his tale. Laughing at him, they said, “Come then, and try your game,” and they rode with him to the palace.

When the princess saw him, she cried, “That is the boy who saved me!”

The princess and the boy fell in love and later were married. When they had children, they always told the tale of the faithful bull and all that he sacrificed to bring joy to the one who treated him well.