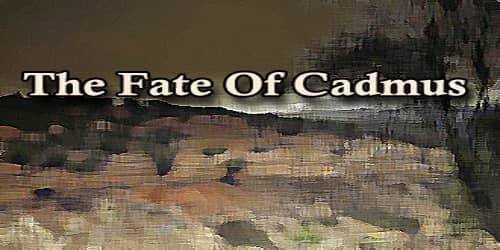 The Fate Of Cadmus

Once upon a time, Europa and Cadmus, daughter and son of a king, were playing on the shores of the Aegean Sea when a great white bull reared his head out of the sea. They gasped at the sight of the magnificent creature with his smooth horns and shining eyes and skin so white it gleamed in the sunlight. The bull swam to shore, and Europa, who was a curious young woman, approached him, stroked his horns, and when he lowered his back, she climbed on. Immediately the bull turned, raced back to the sea and swam toward the far horizon.

Cadmus dived into the waves and swam as fast as he could after them, but he soon lost sight of them. Bereft, he swam back to shore and ran to tell his father the news.

His heartbroken father was furious. “Find her,” he said. “And if you do not return with your sister, consider yourself to have lost a father and a kingdom as well.”

So Cadmus went to sea in a great sailing ship. He searched the whole Aegean; he and his crew stopped at every village and asked everyone if they had seen a great white bull and a beautiful princess. No one had.

One day Cadmus sat upon the shore, certain he had now lost everything when he heard a voice calling his name. When he looked up, he saw to his astonishment the figure of the goddess Athena stepping out of the tall, rocky cliffs.

“You are searching in vain,” Athena said. “Zeus, the king of the gods, has taken your sister, and he never will return her. You must go into the world and found a new city. That is your fate. You will find a white heifer in the mountains. Follow her wherever she leads you. She will bring you to the place of your kingdom, and there she will graze. That is how you will know that you have found your place.”

And with those words, Athena vanished.

Stunned, Cadmus knew he must take Athena’s words to heart. Leaving the ship behind, he traveled with his men across the land. One day he came upon a lone heifer so white, she looked to be the child of the great white bull. When Cadmus approached her, she softly lowed to him and then turned to walk ahead.

Cadmus followed the heifer. They crossed ravines and shores, valleys and mountains. At last, they reached a wide meadow lush with growth. There the heifer bent her head to graze, and Cadmus raised his arms and cried out joyfully, “This is our land! Here we will build a mighty city in the name of Athena.” Then he lay down to rest.

The men, though, hearing a distant waterfall, walked toward the sound. At the sight of the rushing water, they filled their pitchers and jugs and sang and laughed, so delighted were they to have reached a place of rest. They did not hear the slithering sound behind them. They did not see the gleaming eyes staring at them from a nearby cave.

Out of that cave came a serpent’s head, the tip of its poisonous tongue black as ink, its teeth like daggers. And then a second head appeared, and a third, followed by a single body as thick as the columns of a temple. The heads reared. The serpent, which was sacred to the Greek god of war, struck.

Hours later Cadmus awoke. Hearing only deep silence, he looked around. He saw his heifer grazing, but he saw none of his men. He picked up his weapons and began to walk toward the sound of the waterfall. When he reached the cave, he cried out, for there upon the ground lay every one of his men. Then Cadmus saw the great three-headed serpent coiled around a tree.

He seized a stone and threw it with all his might, striking one of the serpent’s heads. He swiftly cast his javelin, piercing the serpent’s thick throat. The tongues flickered still, blackening the leaves of the trees, shriveling their trunks. But the serpent slithered toward Cadmus.

Again Cadmus took aim with a stone and struck once more. This time the serpent died.

Alone with his heifer, Cadmus wept. “All is lost,” he cried until he once again heard Athena’s voice. “Sleep, Cadmus,” she whispered. “Tomorrow you must plow the earth. Into each furrow, you will cast a tooth from the serpent. I promise you will see your city built.”

Trusting Athena, Cadmus fell into a deep sleep. At dawn the next day, he yoked his heifer to a plow he built of scattered tree trunks. They plowed the meadow, and then he plucked the serpent’s teeth from its mouths and planted these in the furrows.

Instantly plants began to shoot up from the earth. At first, Cadmus saw only the points of plants, but soon he recognized these as spearheads; then helmets appeared, and shoulders, and finally heads, and by morning, a threatening army stood before Cadmus. Fearing for his safety, Cadmus threw a rock into their midst, and this set off a war among the men, for each thought another had cast the stone at him. Swords were drawn; javelins were thrown. After many hours, only five men remained.

Cadmus raised his arms, ready to surrender, but as he did, the five sang out, “Hail, Cadmus. We have come to serve you. Command and we obey.”

Cadmus lowered his arms and looked into the eyes of his mighty companions. “We will build a city here,” he said. “And you will be the fathers of its population.”

The men built the city of Thebes, a beautiful city of seven gates. And Cadmus was the city’s first ruler, just as the goddess Athena had foretold.