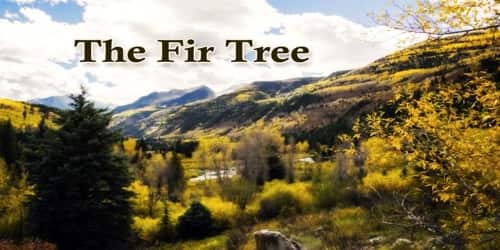 Once upon a time, in a faraway forest, a little fir tree sprouted and began to grow. The sun beamed down upon his slender branches. The wind brushed his leaves. Other fir trees, and oaks and willows kept him company, and forest creatures scurried about everywhere, singing and chattering and chirping to the trees. Overhead, on the highest branch of the tallest oak tree, a wise old owl watched over the fir tree as he grew.

“Oh, how I wish I would grow taller!” the fir tree murmured. The sparrows chirped, but the fir tree paid no attention. He was too busy wishing he would grow bigger. He ignored the merry children who visited the forest. He paid no heed to the soft snow that laced his branches. He shrugged off the warmth of the sun. “I want to grow up!” he complained. “I want to be a big fir tree!”

The next year, of course, the fir tree was taller, and he had more branches. And the year after that, he grew bigger still, and greener and stronger. Still, the fir tree looked up at the tall oak and sighed, “If only I were as big and strong as you so I too could look down on the whole wide world. I wish the birds would build their nests in my branches. I wish I could sway in the wind. Oh, if only… if only…”

Every autumn the woodcutters came to the forest and chopped down the stoutest trees. The young fir tree watched them work as they hauled some of his comrades out of the forest.

“Where are they going?” he wondered aloud. “What will they do?” he asked the hares, the owl, the swallows, the storks, and the sturdy oak.

“I passed several ships when I was flying back from Egypt,” said one stork. “I saw their tall masts. I smelled a piney smell. I think those were your friends. They send their greetings to you.”

The sun beamed down. “Enjoy my warmth, fir tree,” he said. The owl hooted. “Life is short. Do not wash it away.” The soft snow-capped the fir tree’s highest branches and whispered, “Enjoy my blanket, fir tree.” The wind kissed the tips of his limbs. The dew crowned his needles. “Enjoy, enjoy,” they all cried. But the fir tree went on complaining.

When Christmas came, the fir tree watched as people visited the forest. “What beautiful trees,” they exclaimed, and then, one by one, they chopped the trees down and loaded them onto wagons and sleighs they pulled out of the forest.

“Where are you going?” cried the fir tree to his friends. The sparrows began to chatter. “Oh, you can’t imagine the glory that is about to be theirs. They will live in warm rooms and wear popcorn necklaces and fruit and gingerbread rings. They will wear toys and trinkets and tinsel, and a star will crown their heads.”

“Take me!” cried the fir tree when, the next Christmas, the people came again. “Crown me with a star!”

“Enjoy your freedom and your friends,” sang the wind and the sun, the hares and the birds. “Enjoy our lovely forest and the gifts you have,” hooted the owl.

“No!” wept the fir tree. “I want to travel like the other trees!”

At last, one Christmas Eve, the people came to the forest again. This time they looked at the little fir tree and said, “He’s beautiful!”

“Take me!” the fir tree cried.

Suddenly he felt the cut of an ax at his feet. He sank to the ground with a sigh. And to his amazement, when he awoke, he was standing in a handsome drawing-room. He looked around at the oil paintings on the walls and at the pretty stove in the corner where the flames crackled. He listened to the creaking of the rocking chair. He stared at the elegant rugs.

A moment later he quivered with delight, for a boy and girl began to place popcorn, gilded apples, and walnuts, dolls and angels, candles and stars on his limbs.

He was ecstatic. “Look how beautiful I am!” he said. When they saw the little fir tree looking so dazzling, they cried, “You are beautiful!”

“Yes, I am,” said the fir tree proudly. “And everything from now on will be wonderful. My life will be special!”

That night many people gathered in the room around the little fir tree. They sang and told stories. They placed gifts at his feet. And the fir tree, trembling with joy, listened to the stories they told.

“I wonder what will happen tomorrow?” he thought. He longed for the next day to come.

The people returned the next day. This time they removed the popcorn and the candles and the dolls and the angels from the little fir tree’s limbs. Then they lifted him up in the air and carried him up a flight of steps, into a dark, airless room.

A moment later the little fir tree was sitting all alone in a dark corner. “Where am I?” he asked, but there was no one there to answer. He leaned against the wall and wondered.

Many days passed. He felt lonely, and soon he began to think of all his old forest friends. He thought of the sparrows and the owl and the hares, of the snow and the sun. When he heard a “peep,” he looked and saw a little mouse creeping carefully out of his hole. “Hello,” he cried happily. “Hello, won’t you talk to me? Will you be my friend?”

The mouse agreed, and for several days the mouse and the fir tree kept the company in the chilly attic. The fir tree told the mouse the stories he had heard from the people on the night he was all dressed up and wearing a crown on his head.

Not long afterward, a young boy came up the stairs to the attic, and the fir tree felt himself being carried down the stairs and outside. He breathed in deeply. “Ahh, the fresh air. This reminds me of my life in the forest.”

But along came a young man with an ax, and chop, chop, chop, he cut the fir tree into tiny pieces. The pieces he fed to fire and children of the house gathered around and clapped in delight at the warmth and beauty of the little blaze.

And that was the end of the little fir tree, for sooner or later all things come to an end including our story.