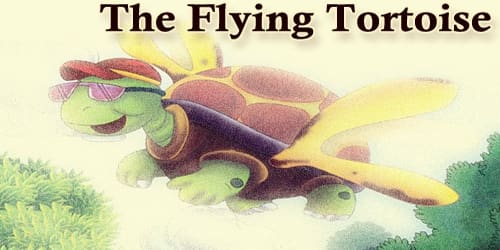 A monkey and a tortoise were best friends. The tortoise saw monkey flying from one tree to another and said, “I also want to fly like you.” So, the monkey curled his strong tail around a branch and showed how they sprang from one tree to another. Tortoise said, “It looks hard.” And without another word, his head disappeared into his shell and he went fast asleep. Soon it was night and the monkey went away. Then the tortoise came out of the shell and tried to leap on to a branch, but his tiny legs were too short to cling on to it. He fell on to monkey’s banana skin.

The sticky banana skin stuck sideways on the hard shell and looked just like a pair of wings. They flapped upwards, and the tortoise began to fly from tree to tree. Then he reached the monkey’s place. The monkey was amazed to see them. The tortoise became quite famous, and the monkey was proud to be his friend.

Moral of the story: ‘We should try and try to succeed in our life.’