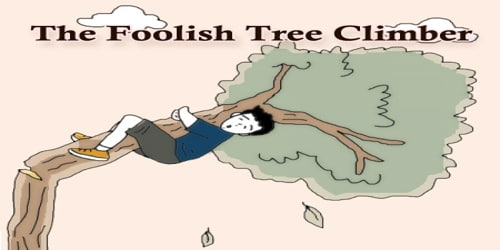 Once upon a time, in a land known as Hope and Plenty, there lived a man named Mumanyi, full of knowledge. He was a quiet man who seldom spoke, but when he did, the people gasped in wonder at his wisdom. Everyone admired him, and he was invited to people’s homes to babies’ births, harvests and the trapping of dangerous leopards.

“Mumanyi,” the people would say, “have you ever seen a more beautiful child?” and Mumanyi would peer down at the newborn and smile. “Beautiful,” he would say, “may she be blessed,” and the parents would be pleased, for the man full of knowledge had offered blessings to their child.

“Mumanyi,” they would say as they walked through the fields, “do you think our harvest will be rich this year?”

Mumanyi would silently walk, and nod, and smile to himself. “Good corn,” he might mumble, “or hard workers,” and the people would celebrate, for the man full of knowledge had gazed upon their land.

When the people went hunting for wild leopards, they would ask, “Mumanyi, do you have any wisdom for us today?”

“Never hunt leopards alone,” Mumanyi advised, and no one did.

But Mutei was a brash, bold youth, and he believed most of all in himself.

“I know how to carve better than he does,” Mutei said. “I’ll bet he doesn’t know a thing about trees.”

“Careful how you speak,” Mutei’s friends cautioned. “Mumanyi says it is not wise to speak ill of people.”

“What does Mumanyi know!” Mutei said defiantly, as he strode into the woods.

You see, Mutei wished nothing more in the world than to become a famous carver. He was forever meandering through the forest, searching for the finest branches to cut so he could practice his carving.

This day he walked through the woods. The sun blazed down, but Mutei did not care. When he spied a nice thick branch, he quickly climbed up the tree, crawled out on the branch he desired and began to chop away with his machete.

Mumanyi passed by. When he saw the boy sitting on the branch he was cutting, he quickly called up to him.

“Hello, Mumanyi,” Mutei answered, continuing to chop. He was halfway through the branch, imagining the beautiful carvings he would make with this wood.

“Mutei,” Mumanyi said, standing directly beneath the tree, “you must not cut the branch that you are sitting on.”

Mutei simply laughed. “Everyone thinks you are wise, Mumanyi, and all the praise has gone to your head. What do you know about branches and trees?”

“I do know you must not cut the branch on which you are sitting,” Mumanyi said.

“And why is that?” Mutei laughed.

“Mutei, my friend, if you cut the branch on which you are sitting, you will fall down and break your arms and legs.”

“Ha!” Mutei scoffed. “Tell me, Mumanyi, how many branches have you cut in your life?”

“There, so I suspected,” Mutei said. “And I have cut dozens and dozens of branches. Surely I know more than you about cutting branches.”

“Mutei, my friend,” Mumanyi said, “I am certain there are many things you know that I do not, but I know for a fact that if you cut through that branch on which you are sitting, you will fall to the ground.”

Mutei simply laughed. “Other people think you’re wise, Mumanyi, but I know a wise man when I see him, and I do not see any wise men around here.”

Mumanyi shrugged and went on his way. He knew that only fools think they know everything.

Mutei, meanwhile, went on chopping, and sure enough, the minute he chopped through that branch, he fell to the ground and broke his arm and leg. He sat up groaning and moaning in pain, but fortunately for him, his friends heard his moans and ran to his rescue.

For many weeks Mutei lay in bed and he thought hard about his foolishness and about Mumanyi, the man the people said was full of knowledge. At long last, he knew exactly what he would do when he recovered.

The day came when Mutei could walk and use his arm again. He longed to return to the forest to cut branches and to carve again. But he had made a promise to himself, so the first thing he did that bright summer morning was set off for Mumanyi’s house.

He found the wise man sitting in his garden sipping tea.

Mutei bowed down before the great man.

“Mumanyi,” he said, and Mumanyi was startled by the boy’s voice. It had a different tone, one that was not so bold and not so brash. The boy sounded respectful and humble. Mumanyi smiled.

“I have come to you to ask an important question.”

“But you know everything, is that not so, my child?” Mumanyi gently asked.

“Oh, no,” Mutei said, “I have learned my lesson, and I know now that you are a man full of knowledge.”

“And your question, son?” Mumanyi said.

“Please, Mumanyi, tell me when I will die.”

“What?” Mumanyi cried. He was startled by the odd question.

“But how could I know that?” Mumanyi asked.

“You can read the future,” Mutei answered. “You knew I would fall to the ground. You knew that I would break my arm and my leg. I did not understand before that you were a seer, but now I know you are, and I would truly like to know when I will die so that I may make my life’s plans.”

Now Mumanyi smiled. “Some things remain a mystery forever, my son. That is the knowledge I wish to share with you today.”

And Mutei went on his way, satisfied that he had received some new knowledge.