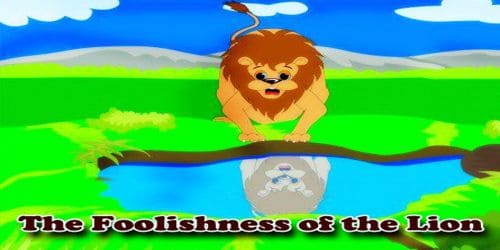 The Foolishness of the Lion

Once a lion in the jungle started killing the innocent animals at random. All the animals remained afraid and passed their days in great tension. One day they called a meeting. They discussed the matter in the meeting at length. Different animals gave their different proposals. Considering all the proposals, they decided that they should manage to throw the lion into the deep well at the center of the jungle. The fox was given this duty. The other animals said that they would help the fox.

Accordingly, the fox went to the lion’s den and told the lion that all the animals regarded him as their king. But they felt very unhappy because another lion had come into the jungle and put pressure on them to obey it as their king. So they would be happy if the second lion was driven away from the jungle. Hearing this, the lion became furious. It said that it would chase the lion then and there out of its own jungle. The lion told the fox to show it the second lion. The fox said that it was drinking water in the well and took the lion there. The lion peeped into the well and found its own image. It thought that the image was the second lion. It became furious and roared. The image also did the same thing. The lion thought that the second lion challenged it. So it jumped into the well to kill the second lion. It found no lion there. Now it tried hard to get out of the well. But the well was too deep for the lion to get out. Eventually, it died there and the animals of the jungle got rid of their great danger. They lived together happily.