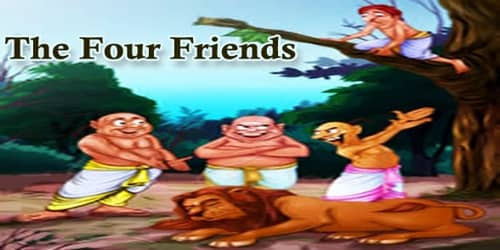 Four friends live in a village which has been struck by famine. Three of them are extremely clever and learned and consider their friend Shivanand a lazy but practical fool.

The four decide to go to a place called Manasa, which is considered an asylum for scholars. On their way, they have to pass through a forest. There they come across bones of a lion. Satyanand decides to show his knowledge by recreating the lion’s skeleton. The other friend reconstructs the lion’s muscles and structure. Vidyanand then wants to show his superior powers by breathing life into the lion.

Shivanand tries to stop them and warns them of the consequences of their plans. But they do not stop. Shivanand climbs a tree before Vidyanand foolishly proceeds with his plans. The lion comes to life and devours the three learned fools.

Moral of the story: ‘It is better to be practical than learned.’