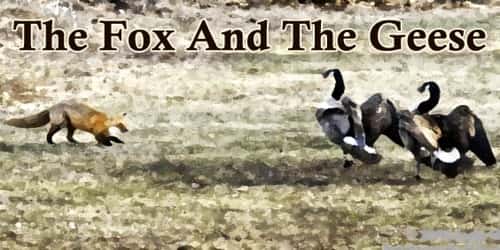 The Fox And The Geese

The fox once came to a meadow in which was a flock of fine fat geese, on which he smiled and said, “I come in the nick of time, you are sitting together quite beautifully so that I can eat you up one after the other.” The geese cackled with terror, sprang up, and began to wail and beg piteously for their lives.

But the fox would listen to nothing, and said, “There is no mercy to be had! You must die.” At length one of them took heart and said, “If we poor geese are to yield up our vigorous young lives, show us the only possible favor and allow us one more prayer that we may not die in our sins and then we will place ourselves in a row, so that you can always pick yourself out the fattest.” “Yes,” said the fox, “that is reasonable, and a pious request. Pray away, I will wait till you are done.”

Then the first began a good long prayer, forever saying, “Ga! Ga!” and as she would make no end, the second did not wait until her turn came, but began also, “Ga! Ga!” The third and fourth followed her, and soon they were all cackling together.

When they have done praying, the story shall be continued further, but at present, they are still praying without stopping.