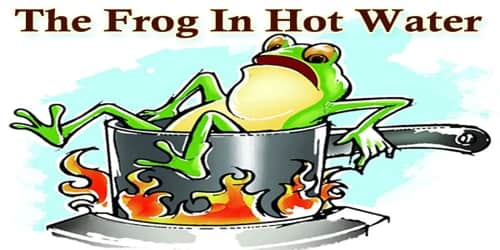 The Frog In Hot Water

Once the frog fell in a vessel of the hot water. The Water was still on a gas stove. The frog still did not try to jump out of the vessel, instead just stayed in it.

The frog tried to jump out of the vessel but with water temperature reaching its boiling point, the frog was not able to bear it and couldn’t make it. What was the reason that a frog couldn’t make it? Will you blame the hot water for it?

Moral of the story: ‘The frog couldn’t make it due to its own inability to decide when it had to jump out. We all need to adjust according to the situations but there are times when we need to face the situation and take the appropriate action when we have the strength to do so before it’s too late. Walkout before you need to jump.