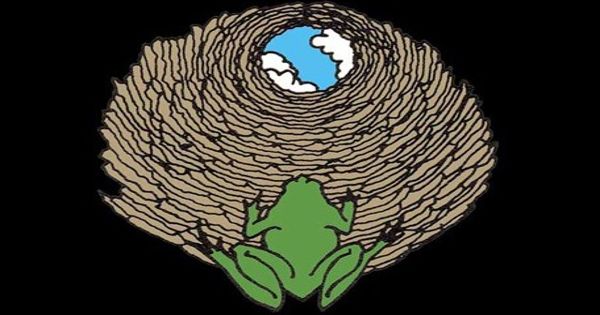 There was a frog that lived in a shallow well.

” Look how well off I am here ! ” he told a big turtle from the Eastern Ocean. ” I can hop along the coping of the well when I go out, and rest by a crevice in the bricks on my return. I can wallow to my heart’s content with only my head above water, or stroll ankle-deep through soft mud. No crabs or tadpoles can compare with me. I am a master of the water and lord of this shallow well, What more can a fellow ask? Why don’t you come here more often to have a good time? ”

Before the turtle from the Eastern Ocean could get his left foot into the well, however, he caught his right claw on something. So he halted and stepped back then began to describe the ocean to the frog.

” It’s more than a thousand miles across and more than ten thousand feet deep. In ancient times there were floods nine years out of ten yet the water in the ocean never increased

And later there were droughts seven years out of eight yet the water in the ocean never grew less. It has remained quite constant throughout the ages. That is why I like to live in the Eastern Ocean. ”

Then the frog in the shallow well was silent and felt a little abashed.

Moral: If you are abashed, you feel embarrassed and ashamed.