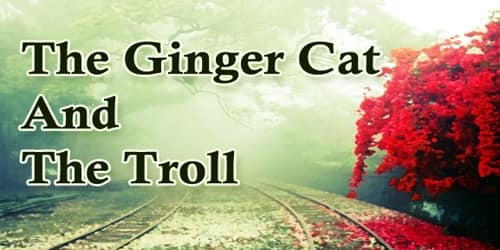 The Ginger Cat And The Troll

Once there was an old troll known as Grumblegrouser. That was his name because he was so quarrelsome, always grumbling and angry and suspicious and envious, so whenever people heard rumblings under the mounds, and shouts and angry words, they would shake their heads because they knew that Grumblegrouser was at work, causing problems in the land of the Troll Folk.

Sometimes the young folk would slip away and lie upon the ground and listen, and that is how the villagers learned of the row that happened one day between Grumblegrouser and his wife.

It seems that Grumblegrouser was jealous of one of the young trolls, a jolly fellow with an upturned nose and ginger-colored hair, freckles; big round eyes the size of saucers and a tiny tuft of whiskers on his chin. Grumblegrouser thought the young fellow was about to steal away his wife.

He growled threateningly at him, and he shouted at his wife and all the others. “That fellow loves my wife,” he snarled, and though his wife a troll of no particular distinction protested and tried to calm her husband, he would not be calmed.

After a while, all the trolls had had enough of this, and they held a meeting. “There is nothing to be done,” said the elders. “Grumblegrouser will not stop grumbling until you are gone,” they told the ginger-haired fellow. “We like you, but for the sake of peace in our land, you’ll have to go away for a while.”

The young troll agreed. There was nothing else he could do, so he climbed out of the mound and set off. To disguise himself, the way trolls sometimes can, he turned himself into a ginger tomcat. He headed to the village nearby, and there he curled himself up on the doorstep of a poor man and his wife.

In the morning when the woman saw the poor old cat asleep on her stoop, she lifted him up, brought him inside and fed him a big bowl of porridge.

He purred happily, and when he spied the ratty armchair in the corner by the stove, he leaped up and fell asleep. This was a comforting spot, he thought. He wouldn’t mind this life for a while. The poor man and his wife did not own much, but their hearth was warm, and sometimes they gave him a great big bowl of milk, and they patted him and talked to him and were altogether cheerful and friendly.

So the ginger cat and the man and his wife lived happily together for a long time, enjoying each other and celebrating many holidays.

And then one snowy winter’s day, just after Christmas, the man was walking home, minding his business, when an odd thing happened. He was passing a mound, though he could not tell; after all, the snow was deep. But suddenly out of the mound jumped a ginger-haired troll, a harmless looking fellow, though he did have just one eye right in the center of his forehead, which was often the telling sign.

The man was startled. Not every day does someone see a little troll with one eye, so he stopped dead in his tracks and said fearfully, “What is it?” The troll put his wrinkled hand to his lips and said, “Shhh, a secret for you, man.” And then he tiptoed up and whispered in the man’s ear, “Tell that cat of yours that old Grumblegrouser has died.”

The man hurried home after that, and he rushed into the house, breathless and a little afraid. He sat down on the chair beside his cat and petted the fellow, and then he said to his wife, “The oddest thing happened,” and he told her the tale.

The moment he finished his story, the cat reared up upon his hind legs. They had never seen him do such a thing. And before they could stop him, he leaped off the chair, running so fast that he spilled the pot of porridge by the stove. As he dashed out the door, he cried, in a voice, the man and woman had never before heard, “I thank you for your hospitality, but now I must return to my home.”

The woman burst into tears, but her husband came to her and hugged her. “Dear, you know that sometimes cats are trolls,” he said.

She nodded, “Yes, I know,” she said, “and trolls like to live with their own.”

“True,” said her husband, “but we will both miss him.” They consoled themselves thus and were happy to know their troll or their cat, or whoever the creature was would return to his old home for the New Year, back where he belonged, with his own kind.

And did he ever marry Grumblegrouser’s widow and live happily with her? It’s something to wonder about, isn’t it?