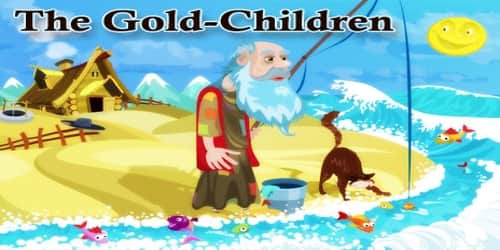 There was once a poor man and a poor woman who had nothing but a little cottage, and who earned their bread by fishing, and always lived from hand to mouth. But it came to pass one day when the man was sitting by the water-side and casting his net, that he drew out a fish entirely of gold. As he was looking at the fish, full of astonishment, it began to speak and said, “Hark you, fisherman, if you will throw me back again into the water, I will change your little hut into a splendid castle.” Then the fisherman answered, “Of what use is a castle to me, if I have nothing to eat?” The goldfish continued, “That shall be taken care of, there will be a cupboard in the castle in which, when you open it, shall be dishes of the most delicate meats, and as many of them as you can desire.” “If that be true,” said the man, “then I can well do you a favor.” “Yes,” said the fish, “there is, however, the condition that you shall disclose to no one in the world, whosoever he may be, whence your good luck has come if you speak but one single word, all will be over.” Then the man threw the wonderful fish back again into the water and went home. But where his hovel had formerly stood, now stood a great castle. He opened wide his eyes, entered, and saw his wife dressed in beautiful clothes, sitting in a splendid room, and she was quite delighted, and said, “Husband, how has all this come to pass? It suits me very well.” “Yes,” said the man, “it suits me too, but I am frightfully hungry, and just give me something to eat.” Said the wife, “But I have got nothing and don’t know where to find anything in this new house.” “There is no need of your knowing,” said the man, “for I see yonder a great cupboard, just unlock it.” When she opened it, there stood cakes, meat, fruit, wine, quite a bright prospect.

Then the woman cried joyfully, “What more can you want, my dear?” and they sat down, and ate and drank together. When they had had enough, the woman said, “But husband, whence come all these riches?” “Alas,” answered he, “do not question me about it, for I dare not tell you anything; if I disclose it to anyone, then all our good fortune will fly.” “Very good,” said she, “if I am not to know anything, then I do not want to know anything.”

However, she was not in earnest; she never rested day or night, and she goaded her husband until in his impatience he revealed that all was owing to a wonderful golden fish which he had caught, and to which in return he had given its liberty. And as soon as the secret was out, the splendid castle with the cupboard immediately disappeared, they were once more in the old fisherman’s hut, and the man was obliged to follow his former trade and fish. But fortune would so have it, that he once more drew out the golden fish. “Listen,” said the fish, “if you will throw me back into the water again, I will once more give you the castle with the cupboard full of roast and boiled meats; only be firm, for your life’s sake don’t reveal from whom you have it, or you will lose it all again!” “I will take good care,” answered the fisherman, and threw the fish back into the water. Now at home, everything was once more in its former magnificence, and the wife was overjoyed at their good fortune, but curiosity left her no peace so that after a couple of days she began to ask again how it had come to pass, and how he had managed to secure it. The man kept silence for a short time, but at last, she made him so angry that he broke out and betrayed the secret. In an instant, the castle disappeared, and they were back again in their old hut. “Now you have got what you want,” said he; “and we can gnaw at a bare bone again.” “Ah,” said the woman, “I had rather not have riches if I am not to know from whom they come, for then I have no peace.”

The man went back to fish, and after a while, he chanced to draw out the goldfish for the third time. “Listen,” said the fish, “I see very well that I am fated to fall into your hands, take me home and cut me into six pieces; give your wife two of them to eat, two to your horse and bury two of them in the ground, then they will bring you a blessing.” The fisherman took the fish home with him and did as it had bidden him. It came to pass, however, that from the two pieces that were buried in the ground two golden lilies sprang up, that the horse had two golden foals, and the fisherman’s wife bore two children who were made entirely of gold. The children grew up, became tall and handsome, and the lilies and horses grew likewise. Then they said, “Father, we want to mount our golden steeds and travel out in the world.” But he answered sorrowfully, “How shall I bear it if you go away, and I know not how it fares with you?” Then they said, “The two golden lilies remain here. By them you can see how it is with us; if they are fresh, then we are in health; if they are withered, we are ill; if they perish, then we are dead.” So they rode forth and came to an inn, in which were many people, and when they perceived the gold-children they began to laugh, and jeer.

When one of them heard the mocking he felt ashamed and would not go out into the world, but turned back and went home again to his father. But the other rode forward and reached a great forest. As he was about to enter it, the people said, it is not safe for you to ride through, the wood is full of robbers who would treat you badly. You will fare ill, and when they see that you are all of gold, and your horse likewise, they will assuredly kill you.

But he would not allow himself to be frightened, and said, “I must and will ride through it.” Then he took bear-skins and covered himself and his horse with them, so that the gold was no more to be seen, and rode fearlessly into the forest. When he had ridden onward a little he heard a rustling in the bushes, and heard voices speaking together. From one side came cries of, “There is one,” but from the other, “Let him go, it’s an idle fellow, as poor and bare as a church-mouse, what should we gain from him?”

So the gold-child rode joyfully through the forest, and no evil befell him. One day he entered a village wherein he saw a maiden, who was so beautiful that he did not believe that any more beautiful than she existed in the world. And as such a mighty love took possession of him, he went up to her and said, “I love thee with my whole heart, wilt thou be my wife?” He, too, pleased the maiden so much that she agreed and said, “Yes, I will be thy wife, and be true to thee my whole life long.” Then they were married, and just as they were in the greatest happiness, home came the father of the bride, and when he saw that his daughter’s wedding was being celebrated, he was astonished, and said, “Where is the bridegroom?” They showed him the gold-child, who, however, still wore his bear-skins. Then the father said wrathfully, “A vagabond shall never have my daughter!” and was about to kill him. Then the bride begged as hard as she could, and said, “He is my husband, and I love him with all my heart!” until at last, he allowed himself to be appeased. Nevertheless, the idea never left his thoughts, so that next morning he rose early, wishing to see whether his daughter’s husband was a common ragged beggar. But when he peeped in, he saw a magnificent golden man in the bed, and the cast-off bear-skins lying on the ground. Then he went back and thought, “What a good thing it was that I restrained my anger! I should have committed a great crime.” But the gold-child dreamed that he rode out to hunt a splendid stag, and when he awoke in the morning, he said to his wife, “I must go out hunting.” She was uneasy, and begged him to stay there, and said, “You might easily meet with a great misfortune,” but he answered, “I must and will go.”

Thereupon he got up and rode forth into the forest, and it was not long before a fine stag crossed his path exactly according to his dream. He aimed and was about to shoot it when the stag ran away. He gave chase over hedges and ditches for the whole day without feeling tired, but in the evening the stag vanished from his sight, and when the gold-child looked around him, he was standing before a little house, wherein was a witch. He knocked, and a little old woman came out and asked, “What are you doing so late in the midst of the great forest?” “Have you not seen a stag?” “Yes,” answered she, “I know the stag well,” and thereupon a little dog which had come out of the house with her, barked at the man violently. “Wilt thou be silent, thou odious toad,” said he, “or I will shoot thee dead.” Then the witch cried out in a passion, “What! will you slay my little dog?” and immediately transformed him, so that he lay like a stone, and his bride awaited him in vain and thought, “That which I so greatly dreaded, which lay so heavily on my heart, has come upon him!” But at home, the other brother was standing by the gold-lilies when one of them suddenly drooped. “Good heavens!” said he, “my brother has met with some great misfortune! I must away to see if I can possibly rescue him.” Then the father said, “Stay here, if I lose you also, what shall I do?” But he answered, “I must and will go forth!”

Then he mounted his golden horse, and rode forth and entered the great forest, where his brother lay turned to stone. The old witch came out of her house and called him, wishing to entrap him also, but he did not go near her, and said, “I will shoot you if you will not bring my brother to life again.” She touched the stone, though very unwillingly, with her forefinger, and he was immediately restored to his human shape. But the two gold-children rejoiced when they saw each other again, kissed and caressed each other, and rode away together out of the forest, the one home to his bride, and the other to his father. The father then said, “I knew well that you had rescued your brother, for the golden lily suddenly rose up and blossomed out again.” Then they lived happily, and all prospered with them until their death.