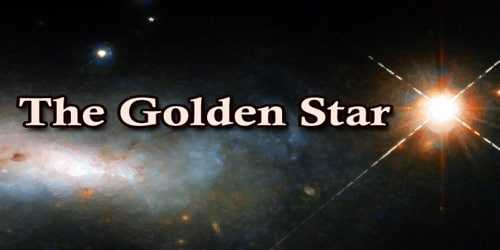 Once upon a time, a boy was born to a poor peasant and his wife. To the amazement of all who saw him, the boy was born with a small golden star upon his forehead. When the child’s godmother saw this mark, she nodded, for she knew what this sign meant.

“This boy will grow up to marry the king’s daughter,” she said, for you see, this godmother was a wise woman, and some even said she was a sorceress.

Before long everyone in the village was talking of the poor lad who would marry the princess. Word spread to the palace.

“This must never happen,” said the king. And so, to make certain that the sorceress’s prophecy did not come to pass, the king disguised himself as a traveling merchant and set off for the peasant’s home.

“I have heard stories of your child,” he said to the man and his wife. “Let me take your boy with me, and I will raise him to know how to behave in court. If he stays here, he will never learn how to be a prince.”

The peasant and his wife loved their son and wished him to have every opportunity. And so, with heavy hearts, they agreed to send their boy away to learn more than he would in their tiny hut in the little village. They wrapped him in a light blanket and placed him in the cradle his father had carved for him. Then they sent him away with the merchant.

Ah, but the merchant was, of course, the king, and his only intention was to get rid of this peasant child. After he had walked a long distance, he crossed a bridge. There he stood staring at the swirling stream below. “This will protect my daughter from the likes of you,” he said to the baby, and he dropped the cradle into the rushing water below. He knew the boy would drown.

But no such thing happened. Instead, as the cradle touched down, the water grew calm, and like a mother’s arms, the waves embraced the cradle and the current carried it toward the bank. That very afternoon a fisherman happened to spot it bobbing among the lilies and reeds. The fisherman picked it up and was amazed to see the child. He quickly carried the cradle home.

The fisherman and his wife had always wished for a child, and this seemed a miracle. And so, with joy, they raised the boy as their own son. He grew into a fine young man.

One day while out hunting, the young man happened to pass the king and his men on their way. When the king saw the star upon the young man’s forehead, he stopped him and said, “Tell me, you seem like a hearty lad, where are you from?”

The young man, who had a friendly and open nature, said, “Let me take you to meet my parents. They are wonderful people.” He led the king to the fisherman’s hut.

“What a wonderful son you have,” the king said, and the fisherman and his wife beamed.

“He is our gift from the river,” said the fisherman. “A far better gift than any fish.”

When the king heard this news, he knew exactly who the boy was. He immediately wrote a note to his wife, the queen. “I am sending a young man who is trouble,” he wrote. “When he arrives, you must have him killed right away.”

He folded his message and handed it to the young man. “Good lad,” he said, “I wonder if you would be kind enough to ride to the palace to deliver this message to the queen. It is a matter of some urgency. Please ride one of my steeds, for they are swift.”

Naturally, the lad said yes, and he headed toward the palace, carrying the note in his hunting sack. But as he was riding through a deserted valley, he happened upon a band of thieves, who stopped him and surrounded his horse.

“Let me see what’s in your sack, boy,” one of them said gruffly.

“I’m only a poor fisherman’s son,” said the young man. “I am on a mission to deliver an urgent message to the queen from the king, and I must be on my way. I swear I have nothing for you.”

“Poor, are you? With such a handsome horse?” sneered the head thief. He did not believe a word the lad said, and so he searched his sack, and then his clothes. Finding nothing but the note, he realized this must be true.

When the robber opened the note and read what the king had written, he realized the king had devised a treacherous plan. He had no love for the king, so to thwart the king’s scheme; the thief devised a strategy of his own. Hidden from the lad, he tore the king’s note into pieces and wrote a note of his own: “Please make sure that our daughter marries this lad. Do not wait for my return. Marry them immediately.” He folded the note and handed this back to the unsuspecting young man, and with that, he sent him on his way.

Fearing he had lost too much time, the lad galloped as fast as he could to the palace. Red-faced and breathless, he reported to the queen, handing her the note as her husband had commanded.

The queen read the note and then looked up at the handsome lad. She understood why her husband would want the princess to marry this young man, and so she sent at once for her daughter, and the two were married that very day.

So it was that the godmother’s prophecy came true, and the young man and the princess lived happily ever after, for they loved each other truly and well.

And as for the king? Well, that is a story for another day.