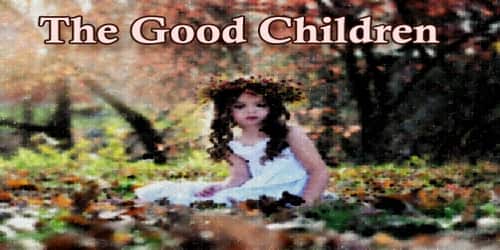 The Lord was angered at mankind, and for three years there was a great famine over all the world; nowhere in the world was even a grain of corn produced, and what people showed failed to come up from a drought so great that for three years there was not a drop of rain or dew. For one year more people managed to live somehow or other, thrashing up what old corn there was; the rich made money, for corn rose very high. Autumn came. Where anybody had or purchased old seed, they sowed it; and entreated the Lord, hoped in the love of God if God would give fertility, “if God would forgive our sins.” But it was not so. They did not obtain the love of God. When they cast the seed into the holy earth, that was the last they saw of it; if it germinated somewhat if it sent up shoots, it withered away close to the ground. Woe! An abundance of it! God’s world went on, sorrowed and wept, for now, it was manifest that death by hunger was approaching. They somehow got miserably through the winter. Spring came. Where anybody had still any grain, they sowed it. What would come to pass? No blessing was poured forth, for the thought began with the wind.

Moreover, there was but little snow in the winter and everything dried up so that the black earth remained as it was. It now came to this all the world began to perish! The people died; the cattle perished; as misery carried them, so did the people proceed.

There was at that time a powerful emperor in a certain empire: as the young ordinarily cleave to the young, so would he associate only with young men. Whether in councilor in office or in the army, there were none but young men; no old men had access to anything anywhere. Well, as young men, unripe in understanding, were the councilors, so was their counsel also unripe.

One year passed; a second passed; then, in the third year, they saw that misery was already on every side, that it was already coming to this, that all the world would perish. The young emperor assembled his young council, and they began to advise after their fashion; they advised, they advised, and ah! The resolutions they came to were such that it is a sin even to give an account of their resolutions! Well, the emperor made proclamation after their advice, that all old people were to be drowned, in order that, said he, bread might not be wasted in vain, but there might be a supply of bread for the young; and that no one should venture, on pain of death, to maintain or harbor any old man. Well, heralds went about throughout the whole country and promulgated the emperor’s command everywhere yea, brigands seized old people where they chose and drowned them without mercy.

There were then in a certain place three own brothers, who had an aged father. When they heard of this edict, they told their father; and their father said: “My sons, such is the will of God and the will of the emperor; take me, let me perish at once, only that you, my children, may live on. I am already with one foot in the grave,” “No, our own daddy! we will die, but we will not give you up,” cried the good sons with one voice, and fell upon his neck; “we will keep you; we will take from our own mouths, and will nourish you.”

The three brothers took their aged father, conducted him into their cottage, dug under the raised portion of the floor, made up a bed with sheets and frieze-coats, for straw was scarce, and placed the old man there, brought him a loaf of bread as black as the holy earth, and covered him over with the floor. There the old man abode for two or three months and his sons brought him clandestinely all they had.

The summer passed without harvest, without mowing. September passed too. Autumn passed without joy. Winter passed too. Now came spring; the sun became warm. It was now time to sow, but there was no seed. The world was large, but there was no seed-corn. When one kind was used up, the people sowed others, hoping that there would be a crop; but when they cast it into the holy earth, it rotted there. It seemed as if the end of the world has come.

Then the three sons went to their father, and asked him: “Daddy, what shall we do? It’s time to sow God is now sending showers of rain; the earth is warmed and is crumbling like grits; but of seed, there is not a blessed grain,” “Take, my sons, and strip the old roof off the house, and thresh the bundles and sow the chaff.” The lads stripped the house and barn (anyhow, there was nothing in it), and threshed away till the sweat ran from their brows so that they crushed the bundles as small as poppy-seeds. When they slowed, God gave a blessing; so in a week’s time it became green like rue; in a month’s time, in two months’ time, there was corn, ever so much, and all manner of seed was found there: there was rye, there were wheat and barley; yea, maybe, there was also a plant or two of buckwheat and millet. Wherever you went throughout the world, there was no corn to be seen; all the plain was overgrown with grasses, steppe-grasses, and thistles, but with them was corn like a forest. How people wondered and were astounded! The fame thereof went over the whole world, and the news reached the emperor himself, that in such-and-such a place there were three own brothers, and with them, corn had sprung up for all the world, and so beautiful, never was the like beheld! The emperor ordered the three brothers to appear in the imperial presence.

The brothers heard of it and smacked the tops of their heads with their hands. “Now it will be men with us!” They went again to their father. “Daddy! They tell us to appear before the emperor. Advise us, daddy, what to do!” “Go, my sons what will be will be, and tell the pure truth before the emperor.” The brothers started off and went to the emperor. The emperor inquired menacingly: “Why, villains, did ye hoard up corn, when there was such a famine that so many people died of hunger? Tell the truth; if not, I shall order you to be tortured and racked even unto death.” The brothers related all as it had been, from the beginning to the end. “Now, most gracious Emperor, give us over to any torture whatever, or let thy kindness have compassion on us!”

The emperor’s brow became smooth, his eyes became serene. He then ordered the old father to be brought before him at once, and made him sit beside him close to his throne, and hearkened to his counsel till death, and his sons he rewarded handsomely. He ordered the corn to be collected ear by ear, and to be rubbed out in men’s hands; and sent it about for seed-corn in all empires, and from it was produced holy corn for all the world.