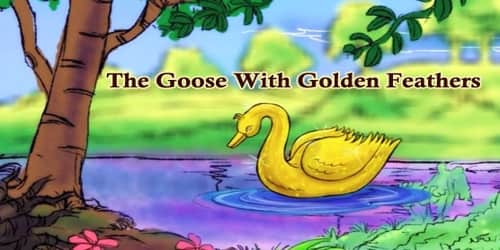 The Goose With Golden Feathers

Once upon a time a poor woman and her three daughters lived at the edge of a river. They worked hard, but no matter how they tried, they seldom had money to buy enough food. The woman spent her days and nights worrying about how she would feed her family.

One day a large white goose appeared at the cottage doorway. The girls caught the goose and carried it into their mother. “Mother, see what we’ve found, a nice fat goose to cook for supper.” Their mother was delighted. “How fine,” she said, and she began to boil a big pot of water.

Just as they were about to put the goose in the pot, it lifted its beak high and spoke. “Please don’t eat me. Pluck just one feather from my tail and you will be happy.”

When the women heard the goose speak, they were startled, but the youngest daughter, who loved animals, stepped close to the creature. “Just one?” she asked softly.

“One feather,” the goose replied.

And so the girl plucked a single tail feather from the big, fat goose, and the moment she held it in her hand, it turned to solid gold.

“Now set me free,” said the goose, “and I promise to return each month to give you another feather. You will never want for anything.”

The girl set the goose free at once, and it flew away across the river.

With the money they received for gold, the mother filled their shelves and their cooking pots. That night she slept in peace, without a single worry. The girls were happy, too, for their stomachs were full, and they knew they would never again go to bed hungry.

Each month the goose returned to the cottage just as she had promised. Each time the youngest daughter plucked a single feather, and each time the feather turned to gold.

One night the mother and the two older daughters sat by the fire, stirring the soup. “One day the goose may not return,” the eldest daughter said.

Her mother looked up. “What’s that you say? That could not happen.”

The second daughter shrugged. “There’s no predicting a goose,” she said. “People say they sometimes fly away for months at a time. Sometimes, I’ve heard, they fly away forever.”

That night the mother could not sleep at all because she was so worried the goose might not return. She worried so long and so hard that at last, she decided she must do something to make sure that they always had a golden feather.

“Next time the goose arrives,” she said to her daughters, “we’ll pluck out all her feathers. That way we’ll always have gold, even if the goose does not return.”

“No,” cried the youngest daughter. “The goose gave us her word, and she has never broken it. We must not break our promise to her.”

“I am only thinking of our best interests,” her mother answered. “If you don’t do as I say, you may be hungry again one day.”

The next time the goose arrived, the youngest daughter quickly ran to her, plucked a single feather and said, “Fly Away,” but just as she was flapping her wings, preparing to fly, the other girls flung a net over her. “Mother, here’s the goose,” they called, and their mother ran outside and plucked out every single feather.

The youngest daughter cried, “Stop, please stop,” but when she tried to free the goose, her sisters held her.

And when every feather was gone, the mother lifted the net and set the goose free.

The youngest child ran to the goose and wrapped her in a large blanket. Then she ran into the woods carrying her.

“Never mind,” said the mother. “Look” and she held up her handful of feathers. But this time something was different. Not a single feather turned to gold. The mother knew then that her greed had been her ruin.

In the woods, the youngest daughter cared for the goose until all her feathers grew back, thick and soft. “Take one feather,” said the goose, “and guard your treasure with care.”

The girl plucked a single feather, which turned to gold. Then, with a tear in her eye, she set the goose free.

The goose flew far, far away and never returned to the cottage. The youngest daughter guarded her gold carefully. Just as she had cared for the poor, featherless goose, she cared for her mother and sisters, and none of them ever again asked for more than their share.