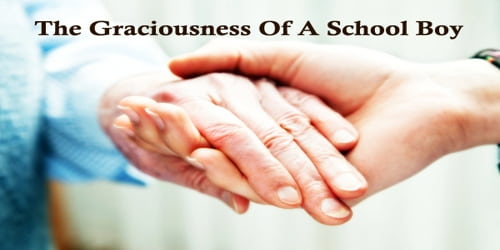 The Graciousness Of A School Boy

Once Nabil went to school. He was supposed to come back at around 5:30 pm. But it was at 10 pm. He was yet to return. His parents became anxious and started searching for him here and there but could not find him out. At around 11 pm. Nabil returned home. Getting him back his parents breathed a sigh of relief. They asked him where he had been so long. Nabil then narrated everything to his parents.

Nabil said, “After school, while I was returning home, I saw an old woman lying on the road. I found her senseless. There was nobody to help her. I found that she was breathing. Then I hired a rickshaw and took her on the rickshaw with the help of the rickshaw puller. I told him to go to the hospital. But there was no hospital nearby. However, the wounded old woman was taken to the Upazilla hospital. There were good doctors and well-trained nurses, they nursed her very sincerely. After a while, she got back her senses. She then informed her family members of her accident. Then they came and thanked me. I was in tension and totally forgot to inform you of it.” Nabil’s parents were very pleased to hear of their son’s graciousness.